One of my favorite early horror movie memories took place in the middle of the night when I watched George A. Romero’s “Night of the Living Dead.” This was one of the first times that the brain-eating variety of zombies found their way into films, and now it’s landed us in the middle of a zombie craze, full of great television shows (The Walking Dead? iZombie?) and online multiplayer zombie games that can be played anywhere from smartphones to computers. Zombie games, zombie movies, zombie comics, zombie novels, zombie everything! For zombie fans, it’s an excellent time to be alive (if we zombie fans can even appreciate such a concept, you know what I mean?)

While it’s great fun to wonder at the grim result of a zombie apocalypse, that doesn’t mean that every zombie game on the market is going to be dark, violent, and full of despair. The zombie craze has caught on for all ages, and they exist in more cartoonish, kid-friendly depictions as well. Or, they exist as you find them in Last Empire-War Z–as the unstoppable, flesh-hungry horde that’s almost as dangerous at the other human survivors.

The best part about zombie-centric games is the entire cultural aesthetic that now comes along with the living dead. Reaching all the way back to that landmark George A. Romero film (which was released in the 1960s, by the way–I only saw it in the 90s…), we can find a rich mythology of zombie lore and cultural references that tie the whole genre together. Zombie games use that mythology just as much as they build upon it, and now, Plants vs. Zombies is mentioned just as often, if not more, than Night of the Living Dead.

Zombie games get even better when they can involve friends, and better yet when you can play them for free! Since there are actually quite a few multiplayer zombie games out there that won’t charge you anything to play (though they may have “in-app purchases”), we’ve gone ahead and assembled a list of those most worth your precious free time. From action-packed shooters to strategy games to puzzle-solvers, we have a wide variety of selections for you to peruse and play, all of which can be enjoyed in the company of one or more friends! Reap the benefits of online gameplay. Eat their brains and gain their knowledge! And while you’re at it, try not to get eaten, yourself…

In the interest of serving Android and iOS users equally (can you hear me, Apple?) the following titles are all available on both popular operating systems, meaning that as long as your mobile device was released relatively recently, you’ll be able to get in on the fun no matter what you’re playing on. Though most of these titles feature violence and dark imagery, the first in my list of recommendations will foster more laughter than it will screaming…

It took Popcap games quite a while to develop the sequel to the landmark Plants vs. Zombies, but the successor that they’ve built is definitely worthy of the mantle. This sequel, Plants vs. Zombies 2: Garden Warfare, takes the elements that made the first game popular and turns them right up to 11. The single-player campaign remains stellar, but the multiplayer has become a truly diverse experience that you might not expect to find in a free app store download.

I’ll save my gushing and glorifying of the gameplay for another article; we’re here to talk about multiplayer modes! The “Welcome Mat” is one of the best introductory primers to a multiplayer experience that I’ve ever seen in a game, and after you’ve warmed up with that, the multiplayer modes only diversify. “Turf Takeover” is mechanically similar to what you’ll see in the single-player campaign, with one player taking over the plant army and the other controlling the zombies. Popular multiplayer modes “Deathmatch” and “Domination” appear in Plants vs. Zombies 2 in the form of “Vanquish” and “Suburbination,” respectively.

Though some hardcore zombie fans may balk at the game’s comical art style and gameplay, I’d encourage everyone to give it a try. There’s a reason that it’s at the top of this list, and that’s because it provides one of the most compelling zombie-themed multiplayer experiences that you can get on a mobile device.

With Unkilled, we return to the very familiar arena of the first-person shooter. However, just because this is a mobile shooter doesn’t mean you’re going to be lacking in gameplay options or complexity. This is a finely-tuned game that provides plenty of fun and challenge. It’s also much more violent and visually dark than Plants vs. Zombies.

The single-player campaign in Unkilled is very standard-fare, but the PvP (player vs. player) multiplayer matches are actually quite compelling! You’ll get access to the same arsenal of weapons with which to wreak your destruction, and the playable characters bring further nuance to the table–each has certain specialties, strengths, and weaknesses in combat.

Zombified enemies are just as varied as your arsenal, which is a trend that was most prominently capitalized in Valve’s popular shooter Left 4 Dead. If you’re looking for an apt comparison to a larger game, that’s definitely the one to compare it to. For a free game, though, Unkilled provides plenty of fast-paced multiplayer action. 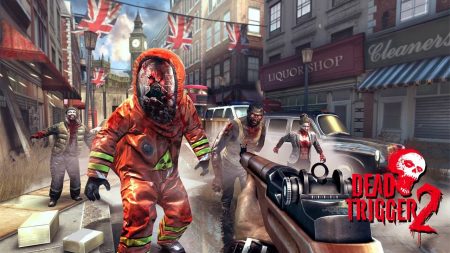 Madfinger Games knows what’s up with the mobile gaming scene, and they strut that knowledge loudly in Dead Trigger 2, the sequel to an already fantastic zombie shooter. Like a proper sequel should, this takes everything that was good about the first game and amplifies it, all the while adding popular multiplayer features that players are enjoying in other mobile game titles.

Fancy the “clan” aspect of Clash of Clans? You’ll be able to form online teams in Dead Trigger 2 as well. What makes the shooter gameplay in this title particularly fun is the way that it’s constantly updating with new gameplay objectives, new weapons, and other additions that truly make the game come alive.

One of the things that mobile shooters notoriously struggle with is the control scheme. So often, they’re forced to emulate the twin-stick setup of console controllers for the Xbox or Playstation, but Dead Trigger 2 manages to mostly overcome this hurdle, though you’ll be more prone to notice the difficulty during moments of intense action.

Shooters are definitely one of the most popular types of games where you’re going to encounter zombies, but Last Empire-War Z shows us that an RTS (real-time strategy) game can take advantage of that popular zombie mythology in interesting ways.

If you’re a Clash of Clans veteran, you’ll see many of the same gameplay tropes featured here, though that’s not a bad thing by any means. Facing down enemy hordes takes on a whole new urgency when you’re facing an army of the living dead rather than goblins. You’ll also be interacting with other players in plenty, whether you’re allying with them in order to bolster each other’s chances of survival or trying to tear them down in order to guarantee your own survival. You’ll be paying close attention to every unit, every defense, and every unit type at your disposal in order to create a “city” capable of persevering and attacking. Resources can be harvested and used to upgrade everything you control, and smart playing has its own rewards.

As with the other titles on this list, there’s a surprising amount of complexity to be had here for a mobile title! The stereotype of free to download games having less overall content in them than a title you might pay a few dollars for is thoroughly disproven by all of the above games.

Emulating on Your Windows PC or Mac

Of course, there’s also the possibility that you’re not looking for a free online zombie-centric game to play on your mobile device; you’d rather play one on your Windows PC or Mac! Well, my friend, if you’ve never read any of Appamatix’s previous coverage of Android emulation, I have a treat for you!

There’s a frustrating divide between the types of games played on mobile devices, and those played on PCs and consoles. Whereas you can get an exceptional amount of gameplay at a small cost on your mobile device, getting a good multiplayer game on a stronger gaming platform is going to cost you exponentially more.

Unless, of course, you can bring the same experience and the same games from your mobile device to your PC, which is what an Android emulator allows you to do. Using well-developed third-party software, you can run a virtual instance of the Android operating system on your Windows or Mac computer, thereby allowing yourself to play the same games on a much more comfortable, larger screen than you’d be able to on a mobile device.

How is it done? You’d be surprised at how little setup time it will actually take.

All of the games we’ve included in our recommendations are available on Android, which also means that they’re available to be emulated on your laptop or desktop. With the method, nobody can ever tell you that PCs and Macs are lacking in excellent, free, multiplayer zombie games.

If you’re an online gamer and have recommendations that you think belong on this list, let us know in the comments below!