If you enjoy texting with your friends but don’t want to pay annoying overage fees, then you have probably already downloaded an app that let’s you text completely for free. One of those apps is Kik, a great and easy to use app that has a ton of features and lets you chat with anyone around the world completely free. For Kik tips to use the app on your computer we recommend Kik Login Online.

Whether you’re new to Kik or have used it for a while, I’ll show you the best Kik secrets so that you can impress your friends and tricks to use the app easier. Including how to use Kik Messenger on your PC so you can chat any and everywhere.

Often times, developers of apps will include little secrets in their app that you have to either stumble on or know beforehand to make it work. That ‘s where I come in. I’ve done all the research to find those little tricks you never thought of that can make the app more fun to use.

Are you new to Kik? If so, I’ll go into a bit of detail about the app, it’s features and what people can use it for. I’ll also chat a bit about the name and where it came from.

If you’ve heard of WhatsApp, WeChat, Line, Viber, etc. you know the primary concept of Kik and what it can do. Kik allows you to send text messages, video, sketches, images, etc. all through your local WiFi connection or your cellular data. That way you don’t have to use your text messages in your cell phone plan and risk going over your allotment per month.

One of the differences compared to WhatsApp is that you use a Kik username instead of using your cell phone number. That way you don’t have to give your cell number to someone you just met on Kik. Another great feature of Kik that sets it apart from other similar apps is that it has a built in web browser so you can go to websites and check Facebook and Twitter all while you’re in the Kik app. This let’s you do a ton more without leaving the app.

You can also see if your messages are sent, delivered, and read so that you can tell if someone is ignoring you or just hasn’t seen your message yet. If you haven’t downloaded Kik yet, you can head over to your smartphone’s app store and search for Kik. Tap the download button and from there you will need to enter in your name, username, phone number, and a password of your choosing. Presently, there is no desktop version of the app, but we have a workaround for that, if you would prefer to do your messaging from your computer when you’re at home.

Let’s not hold you up any longer and jump straight into the secrets and the various tips to help you use Kik a little bit better. Remember, Kik is constantly updating their app so more Kik secrets might show up after an update or some might be disabled. I’ll try to update you if that’s the case. Let us know in the comments below if any of these don’t work for you.

One of the annoying things about Kik is that it constantly sends read receipts so that people know if you’ve read their message and have chosen not to respond. Sometimes you’re busy and can quickly glance at a message but don’t want to take the time to answer it. Also, there are some people who are annoying and won’t leave you alone and even if you read their message you don’t want to tell them that and have them get upset that you haven’t responded.

With this secret you can trick Kik into not showing the “R” but only showing the “D” that the message has been sent but never read (even when you read it).

Say a friend texts you on Kik and you want to read it but not show that you’ve read it. There are two options that I know of to “secretly” read the message.

1. Say you just got a message from a friend that you want to read. If you’re on an iPhone you can double click the home key which will change the screen to show screenshots of all your apps open so that you can close them. This will give you a screenshot of the app and show the message. After you read the message just tap the home button again to get out of Kik without ever showing that you read the message.

2. The second way is after receiving a message turn on airplane mode. Then open the Kik app and read the message. You will then want to get out of the app and you can then turn airplane mode off and it won’t show that you’ve read the message. You can see verification of this technique below where I sent myself a test text on Kik and it still displays “D” not “R” for the second text. I wasn’t quick enough getting out of the app when texting myself the firs time, hence why that didn’t work. But that won’t be an issue if someone else texts you. One of the cool hidden secrets in Kik is that you can text the logo to your friends. This is because Kik has gone into their app and enabled an emoji of their logo for its users to use. This makes sense as it helps promote their brand and is a cool feature that most people try at least once when they figure it out. To do it, follow these steps: 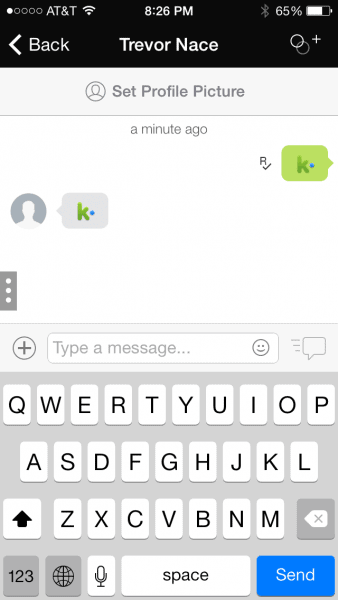 As you can see above it send the Kik symbol instead of the actual word. This is a cool little secret you can use with your friends.

The next Kik secret is a way to trick your friends into thinking you’re typing a message to them when you’re really not. You may not already know but when you’re in a conversation on Kik you can look at the top and it will show the name of the person you’re chatting with. When that person is typing it will show that they are. For instance, if you’re texting with John Smith and John starts typing a response to your text, it will show as “John is typing…” at the top.

Now, whenever someone is chatting with you on Kik they will think you’re constantly typing and will be super confused. You can always change your name back to your original name if you get tired of it.

Unfortunately, Kik is too commonly used by creeps trying to chat with girls and get them to send inappropriate photos. The fact that Kik uses usernames and not phone numbers makes this even easier as there is hardly any way to verify for certain the person is who they say they are.

For instance, you could know someone, let’s say John Smith, from class and want to chat with him. You look up his name and find a John Smith and are pretty sure it’s him but aren’t sure. A lot of times people will ask for someone to send them a photo to verify they are who they say. However, it’s all too easy to take a photo online and use it to trick people into thinking it’s themselves. That’s where this awesomely useful tool comes into play.

The tool is called TinEye, which allows you to upload any photo and TinEye will search literally billions of photos to see if there are any duplicate photos. That way you can ask for a photo of the person on Kik and run it through this tool to see if they just downloaded it or took a screenshot from the web. If you find the image is used elsewhere that is not associated with their Facebook account or other social profile, then you know they are faking.

Beware that some people are really good at creating fake and misleading accounts so if you’re still unsure, best bet is to not talk with the person and block them. If you know them in real life, ask for their username in real life and make sure you never give out personal information such as your last name, where you live, cell phone number, etc.

This Kik secret will allow you to use Kik on your PC or Mac anytime and anywhere you want. It only takes about 10 minutes to set up and is completely free. You will want to follow the steps below to download and install an Android emulator. The most popular emulator is BlueStacks, however you can use any number of other emulators out there, just search for Android emulator in Google.

Now you will be able to use Kik on your PC and continue your conversation from your iPhone or Android onto your computer. It comes in handy if you’re at work or somewhere that you need to be on a computer but it’s not convenient to use your phone. For more general advice, check out PC Login Online, which provides online and login tips for computers.

I’ve compiled some of the best Kik secrets of 2015 so that you can stay up to date on the very best features and tricks that Kik has to offer. Let us know if you found any other great secrets that will help you be able to use the app even better. We’re happy to hear about your favorite new tricks.

We’re back again, and it’s been another fantastic year for Kik Messenger. We haven’t exactly seen a huge explosion of new features, but those we have seen are fantastic, and the Kik development team has poised their app right on the cusp of the mobile messaging future. Furthermore, Kik’s new additions continue to set it apart in an increasingly crowded field of messaging apps that are all struggling to both share the same, in-demand features, but also differentiate themselves in unique ways. The transition from 2015 into 2016 has been all about innovation, and this is evident in what we’ve seen of Kik’s growth.

2016 is frequently touted as “the year of the chat” in tech circles, simply because bots and other innovations are allowing us to rethink the boundaries of what we can do in a chat app. Stay tuned to Appamatix for more cool updates and useful tech-related tips!

Know of any other great tips or secrets to Kik that will help us use the app better? I hope these secrets have helped you get a little more out of the app and you can use them to impress your friends. Let us know in the comments below if you hear of any other great Kik secrets!

Note: This article was originally published on August 7th, 2014. It’s been updated with new content as of May 5th, 2016! Cheers, readers!