Maybe you’re in school and you’ve just realized how few days you have left to summer. Maybe you’ve been thinking Thank God it’s Friday all day at work only to get home and realize it’s only Thursday. Whatever’s going on, you need a laugh. Everyone likes something that will pick their day up, like funny pictures with captions to make them laugh on a Monday or pass the time a little quicker during class.

I’ve compiled some amazingly hilarious pictures turned into memes. I pretty much live on the internet (to answer your question, this site is only my guest house), so I’m always coming across new pictures, gifs, videos, and so forth that just strike me. Oftentimes, my thought is… well, not a thought at all, because I’m just laughing my rear off. Sometimes, I see a meme or a clip and I think, “What is supposed to be going on here? What was this person thinking? How is this a joke?”

Of course, humor is completely subjective, so you may not agree with me on all of these, but I just thought I’d share some stuff that I found funny. Also, because I’m always over-thinking, I’ve given thought to what makes these pictures so funny, and have tried to distill the essence of what they’re all doing in common. I’ll also go over some tips and tricks on making your very own captions on photos. You don’t have to wait to find one online, if you come up with a good idea, you can implement it right away. I mean, after all all of these memes and photo exchanges are really just a conversation. And who wants to be the guy nodding along and saying, “Yeah, what he said. What he said. Ditto to that, too, man…” No, nobody wants to only repeat; everybody wants to contribute. So I want to help you be able to put together your own funny image / caption pairing so that who knows, maybe we’ll see your work here in future edits of this article?

Of course there will always be a constant influx of funny images that could use a great caption so keep your eye out on Facebook or Instagram for a photo that’s too good to pass up. Feel free to post something you like as a link in the comments, and please, if any of this stuff brightens your day, pay it forward: send this link out so you can help brighten somebody else’s day a little, too.

“A drawing is always dragged down to the level of its caption.” – James Thurber, Cartoonist

The Funniest Pictures With Captions

Without further ado, let’s get into some awesomely funny photos with even better captions. Leave a comment below if you have any other photos that you like, we’re always looking for a good laugh.

If you enjoy these pics, please share this post on Facebook or Twitter so that everyone can enjoy them as well. Keep in mind some of the photos can be offensive but they’re all meant to be in good fun. I’ve compiled these photos from around the web and sifted through literally hundreds of images to find the very best ones for you to enjoy.

If you haven’t see this nerdy guy in a meme before you probably haven’t seen many funny photos. There are a ton of memes out there using what looks like this kid’s high school photo. I wonder what he thinks of his internet notoriety. In this picture, he looks like somebody Anthony Michael Hall would beat up. No, not Anthony Michael Hall in Edward Scissorhands or that Christmas (sorry, holiday) episode of Community. Anthony Michael Hall in the freaking Breakfast Club. But hey, we all have our awkward phases. I hope he’s grown out of it since. I hope to grow out of mine, too, eventually. For some reason the memes that use old paintings always crack me up, if you’re lucky we may just get another one on this list. But really, this guy has got it going on, right? By the way, I was at Colonial Williamsburg recently, and I saw a guy who looks just like this. Seriously, my phone was dead at this point, but my readers in Eastern Virginia, see if you can find that guy.

Honestly, any meme with Zach Galifianakis in it will be hilarious, and this one does not disappoint. Men shouldn’t shave anything beyond their facial hair. No reason to shave anything else. Well, maybe if you have a ton of back hair, no one likes that. If you don’t understand this one, I won’t be the one explaining it to you. Google’s your friend but make sure no one’s watching your screen when you look it up. Nicholas Cage as creepy as ever and awesome use of a caption. Let’s hope he stops making movies and retires on an island somewhere. Everyone likes an uplifting story and what’s more uplifting than an amputee finding an arm in the desert. 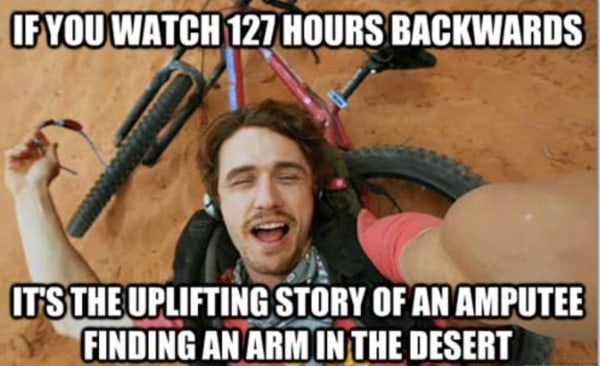 Even when they put a sign at work that says “Pull” I still see people pushing it as clueless as ever. Somehow, I don’t think that will ever change. The fact that they used a pug makes this all the more funny. Basically, any image of a pug is hilarious. I’ve always wanted to get a pet pug and name him Pizza. I’ve never seen this done before but it would scare the crap out of me I know. On top of the fact that I’m sure it’s pretty slippery, especially if it’s wet. Good luck to whoever pulls off this prank though, it would be pretty epic. I haven’t heard a Chuck Norris joke in a while so I thought I would throw this in to the list. I’ve split a few rocks that big, no big deal. Ladies and gentlemen, don’t go to jail unless you want to deal with this guy and his soap. Why no, I don’t mind if you comb over at all. That’s the image of a pure gentleman and someone who just wants to be your best friend. Forever. Somehow this is so gross it’s funny. I feel bad that this kid’s parents let him get this way but who else would we use in a meme like this? This photo is all the more funny because of this guy’s goggles. It’s beyond me how he fit those on his head but I’m not going to tell him to take them off. You shall not pass. If you’re not a Star Wars fan you can get the heck out. This is me pretty much every day. 15 minutes into a powerpoint and I’m fighting to stay awake. I hope you don’t have a boss like this. No one wants that. This guy’s face is priceless and that smile just looks like he did something really creepy. I would argue she’s wanted outside of the US as well. Just a hunch though. A bit creepy with the tear drop tattoo. But, he’s happy to see you so that makes everything better, right? Awesome Godfather quote, Don would be proud of this. Those are some seriously big fists, he could do some damage. Are those fruit loops on a celery stick? Who does that and why does he look so disgusted and pissed. Someone needs to cheer this kid up asap.

Well that was awkward, wasn’t it. Looks like you got a new pet hawk now, you’ll just have to catch it before it kills you. It’s the old swinging cactus photo. This one’s been around for a while but always cracks me up. What I wouldn’t give to have a video of this and see what happens next. Well, Mr. Meteorologist man, looks like you’ve bit off a little more than you can chew with this one. That wraps up this list of the absolute funniest pictures with captions and hopefully got you laughing the entire time. I know I’ve enjoyed making these and found a bunch that I had never seen before.

If you feel inspired by the memes above and want to make your very own one to share with the world just continue reading below for a step by step guide on creating captions on any picture.

How To Make A Funny Picture With Caption

Sometimes your humor is the best humor. We’ve all fallen to laughing hysterically at our own jokes only to find other people didn’t think it was quite that funny. Oh well, I say continue to laugh at your own jokes and life will be a bit more fun.

That’s why I’m going to show you how to create your own funny pictures including text captions and everything. You can opt for an image that you find on Google or one of your own images. Luckily, it’s not very hard and will get you on the right track in no time.

To create your very own meme you can use a number of different tools. If you’re on a Mac, you can insert text using the preview app and that will let you write a caption on any photo. Alternatively, if you’re on a PC you can head over to Microsoft Paint and that will let you add text as well. However, if you are using an iPhone or Android these are obviously not options for you.

That’s where the online caption generator comes into play. My personal favorite is Imgflip as the best online tool to upload an image and add captions to it. This is super easy whether you’re on a computer or on a smartphone. TIP: Photos with captions often times have people in the photo. I suggest using a funny image with a person in it to make more of an impact.

If you tend to take photos and want to add text to them regularly than you may want to just download an app that will do it for you so you don’t constantly need to go to the site above to do it.

If you use an iPhone, I would recommend downloading Meme Generator that let’s you create captions on any one of your favorite photos. You can choose one of the popular meme images or upload your own photo and from there you can add text to it and share it with your friends from the app.

If you use Android, I would recommend the Meme Generator Free, which again allows you to do many of the same things as the app above but is for Android. There are over 600 built in images to use to create your own meme and from there you can edit it by changing the font and altering the color, size, location, border, etc.

That wraps up this post and I hope you found it helpful and humorous. Please comment below with your favorite photos and share this with your friends.