Snapchat is all about quick communication. You take Snaps quickly, you send them quickly, and you read them quickly (or they’ll disappear just as quickly.) As the adage goes, “A picture is worth a thousand words,” so there’s a lot of information that can be packed into a single image, thus allowing you (once again) to communicate a lot — quickly. Something else that helps communicate are Snapchat’s various systems of emoji which, to the initiated, will let somebody see some very specific information about your friends and relationships at a glance.

But just like any language, it doesn’t communicate anything to you if you don’t speak it. So we here at Appamatix are going to help you out by helping you see the entire system of signs at work in the Snapchat Red Hearts, Yellow Hearts, and all other kinds of emoji and symbols which are all communicating the same thing.

You may have encountered this before: next to a friend’s handle on Snapchat, there’s a yellow heart. And then, one day, all of a sudden the yellow heart is gone, and it’s been replaced with a red heart. Or even a series of pink hearts.

Well, this isn’t a bug, and Snapchat isn’t constantly changing its design aesthetic. This is all part of a very specific system of emoji being used towards a similar end. Let’s take a look at it, shall we?

But Snapchat uses emoji slightly differently than they’re used in a lot of other apps — including social media apps. In Snapchat, emoji aren’t just icons and images you can use to communicate with people, (although, they are that, too). Snapchat also uses emoji in novel ways — such as in their Trophy Case, which lets you earn achievements based on how you Snap. In this case, emoji are used to indicate specific levels and benchmarks you enjoy with your Snapchat #1 Best Friend.

You may have encountered an idea around on the internet in conversations about Snapchat. It’s certainly one that’s relevant to this present one. This is the #1 Best Friend. (It definitely sounds like something Forrest Gump would say, right? Jenn-ay, you’re my number one best frand. And you betta believe that my accent was on fleek; I’m from the South, fool).

That’s it. No contracts, no secret handshakes. It’s all set by the same mechanics that determine your love interest in Capcom’s Dragon’s Dogma.

The Meaning of the Snapchat Red Heart, Yellow Heart, and More!

Like I said above, what we’re working with here aren’t just some random symbols, this is a language. But it’s a language which is only meaningful if you know how to speak it.

For instance, when the baby head appears next to a friend’s name in Snapchat, it means that you have just become friends with this person. It makes sense in a way: babies represent newness (and also poop), so by putting this icon there, Snapchat is saying that your relationship with this person is new (and also poop). But if this new “friend” was someone you were planning on texting, this baby might really put you both out of the mood.

But let’s say that you’re more than friends on Snapchat. Yes, you’re Best Friends. Even better, you’re #1 Best Friends. That’s when this little yellow heart icon will start to show up next to that friend’s name. Oh yes, hearts. That’s exactly what comes to mind when I think of my best friends. Maybe Snapchat knows something that you don’t, and it’s time for an honest conversation. Seriously, though, one thing to keep in mind about the Snapchat Best Friend relationship is that, you’re not necessarily going to be your Best Friend’s Best Friend. I mean, if you text with your friend a hundred times a day, but he texts with someone else a thousand times a day, he’s going to have a different Best Friend. And sore thumbs.

Once you and your friend have been Best Friends (Snapchat definition) for two weeks, that yellow heart changes to a red heart. So if you have been noticing this changing, it’s not a sneaky backdoor update or anything, it’s just things progressing. Bear in mind, you have to consistently be best friends for the entire two weeks. If you become Best Friends with someone else (by Snapping them a lot), then they will get a yellow heart, and progress will reset.

No word yet on what happens if you’ve been #1 Best Friends with someone for two years. I think when that happens, you’re legally married in at least 14 states.

This is the face you will see next to someone’s name if you both have the same #1 Best Friend. Yes, the both of you have the same friend that you send the most Snaps to. The three of you should probably sit down and define your terms. Anyway, this face is referred to as “the grimace.” And I get it, “grimace” refers to a facial expression of discomfort or disgust, but I think, thanks to McDonald’s, the word has been entirely co-opted by this point. After all, how many of you, as soon as you read “grimace” didn’t immediately think of this dude: We here at Appamatix refer to creepy McDonald’s mascots when we talk about Snapchat. It’s just a thing.

But I don’t think that’s what that face looks like at all. In fact, looking at that emoji blown up like that, there’s one specific movie poster I keep thinking of: 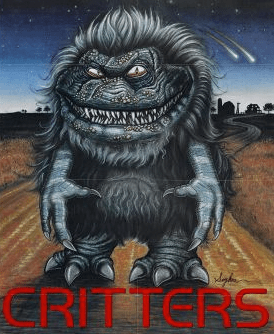 Those of you with memories of this image on a VHS rental shelf, you didn’t need to sleep tonight anyway.

This one means that this person is a Best Friend of yours. Not your #1 Best Friend, mind you, but Best Friends nonetheless. And that’s worthwhile. It’s even blushing, so this could really go somewhere if you play your Snaps right.

If the smiley face with sunglasses appears next to a contact’s name, this means that the two of you have a Best Friend in common. Maybe this is someone you’ve just met (which is a bonus, because this image should replace that creepy floating baby head), but whether it is or isn’t, this may be someone you want to get to know better, since you both have the same taste in friends.

If this smirking face appears next to a friend’s name, this means that you are one of this person’s Best Friends… But they aren’t one of yours. This is a real one-sided relationship, which you may be okay with. That might explain why  this face looks like its owner just farted in an elevator. Rude.

This one isn’t Best Friend based, but it’s an accomplishment nonetheless. When you see this next to someone’s name, this means you’re on a 100 day streak. For one hundred days, you have Snapped back (and forth!) with this person. Look at you, Snapchat pro that you are! The only problem I see is, while I can figure out how most of these icons relate back to the idea that they’re representing, this one is completely lost on me.

When you see this fire next to somebody’s name, this means they’re on fire! Call 911! No? Sorry, I must have gotten distracted. This fire emoji simply means that you’re on a Snapstreak with an individual. So this is what you’ll see before you get up to 100.

Finally, this shining star (no matter who you are, shining bright to see, what you could truly be) shows that this person’s Snaps have been responded to in the last 24 hours. This person isn’t just saying stuff to hear themselves talk; this person is saying stuff that people really want to respond to and keep track of. Hey, maybe they know something you don’t! Try to get in on the conversation, and see what’s going on.

Those are the emoji that can show up next to a Snapchat contacts name, and what they all mean. Is there anything we left out? It wouldn’t surprise me: Snapchat is constantly updating, and they love to keep some things under wraps as a reward for the people who really explore the app and see what it’s capable of.

Well, if there’s anything which I’ve forgotten, feel free to mention it in the comments! Also, who do you think Forrest Gump’s #1 Best Good Friend would be on Snapchat? Leave that in the comments as well. Be safe out there, kids.

And beware the baby head…