You are here: Home / App / WhatsApp For iPad With This One Trick (No Jailbreaking)

Attention WhatsApp’ers. If you’re like me, you want to enjoy a variety of options as to what platforms you use your favorite apps on. After all, what’s the point of investing in a good suite of technology if you’re never going to use anything other than your phone?

And while several apps available for the iPhone also have iPad ported cousins, there are still countless apps which do not. And while there are one or two handy work arounds to get most of these apps onto your iPad, there is one app which resists all the basic strategies. That app is, you guessed it, WhatsApp.

I’ve researched the WhatsApp for iPad problem fairly extensively, and now I bring you a one or two tricks that will help you put Whatsapp on your iPad.

Texting is addicting. Once you get emotionally involved with constant outside stimulation assaulting your brain, it is hard to stop looking at your machine every two minutes. Without rapid fire words appearing on a screen, you feel bored, not part of the action. — Bill O’Reilly

If you’re reading this, then likely you already have experience with or interest in WhatsApp, the most popular messaging app on the planet (though, admittedly, it doesn’t have quite the same market share within the United States).

WhatsApp is quite handy for those who watch their cell phone plans like a hawk: By giving you an alternate way to text, this won’t eat into your monthly limit of texts that several phone companies still enforce. Also, if your phone is connected to WiFi, then you won’t even have a need to dip into your data plan, making it all in all a great app for the budget conscious, high-volume texter.

And given its popularity, the app is available on a broad array of devices: Although it was originally developed for the iPhone, ensuing years have seen WhatsApp ported over to numerous other platforms, such as Blackberry and Android — even Windows Phone users have an official WhatsApp app they can use on their phones.

The key word here, though, is phone. For while it is available for nearly every smart phone out there, it isn’t officially available on tablets — not even the iPad, the big brother of its original platform.

…doesn’t work. Yes, I know, it’s the first thing I tried. For those of you unfamiliar with it, there is a very simple trick that usually works perfectly whenever you want to install an iPhone-only app onto your iPad (and occasionally, vice versa). The trick goes as follows.

However, I searched for WhatsApp “iPhone only” in my iPad App Store and got nothing.

Well, that’s not entirely fair — I got several apps emoji managers, some photo filters, one or two sketchy looking apps waiting to pounce on the unwary — and no fewer than two apps that exist entirely to explain how to get WhatsApp on your iPad. They’re made entirely of links to web pages and links to videos… which raises the question of why they needed to be apps.

So, the usual route for installing an iPhone app on the iPad is not available to us here. However, all is not lost: you can still get WhatsApp on your iPad, but it will require some extra work.

A Note About Jailbreaking

Just to head off some of the comments I know this article is going to receive: yes, I know this problem can easily be solved with jailbreaking — jailbreaking being the process of hacking your device to give you a fuller set of permissions as far as what you can do with your tech. And in theory, this is fine. Apple seems to be convinced that, after you’ve spend hundreds of dollars on one of their devices, the last thing you want is a choice as to what you do with your device. There are numerous guides out there that will walk you through jailbreaking, but I’m not going to link to any of them for two simple reasons:

First, jailbreaking is risky. If you don’t do anything exactly right, or if any unexpected complications come up while in process, you may ending up “bricking” your phone — turning it into an inert plastic brick which will no longer make calls or even power on. In addition to those risks, there is also the chance that your jailbreak will be discovered, which may lead to the termination of your support contract. Customer support is one of the best things about having an Apple device, so think long and hard about this. Unless your device is so old that it’s no longer covered.

Second, jailbreaking is complicated. Depending on the method or client you are using there are a lot of protocols that have to be carefully followed, or else (see “risks” above.) And really, this is too much for a lot of casual tech users who don’t want to install a different OS, or otherwise hack their device — they just want to be able to put WhatsApp on their iPad.

So, with that in mind, I’ll proceed with a method for using WhatsApp on your iPad that doesn’t require jailbreaking.

The Simple Trick to Use WhatsApp from your iPad

Now, there are more complicated methods you can follow than what I’m about to give you. You can have a device storage manager installed on your computer, like iFunBox, and use that to manually install the WhatsApp file onto your iPad. This isn’t quite jailbreaking, but it’s close. In fact, Apple has been pretty diligent about closing all the exports that programs like this use in order to access the iPad file tree. And with iOS 9 beginning its reign, you’ll never know if the program you’re using will continue to work past each new update.

If the above seems like too much hassle to go through just to use your favorite messaging app on another device, know that there is another option: There is a web client which will let you use WhatsApp in a web browser. This web client works best with Chrome, Opera, or Firefox. It will work with Safari, but with limited functionality. I’ve not tried it with every browser, so I can’t attest to its usability for every configuration. If there’s a configuration which either has or hasn’t worked best for you, mention it in the comments.

In order to be able to use WhatsApp Web, you will need to already have an active WhatsApp account, and a phone with the app already installed and configured.

To use it, just point your browser over at the WhatsApp Web webpage. Please note, if you’re trying to get to this page from your iPad, you may need to force the desktop version of the site. In the iPad’s default browser, you can do this by following the steps below. 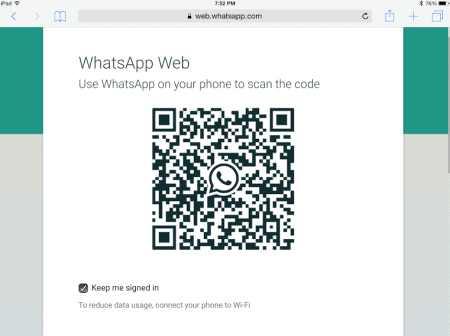 Now that you have that QR code, open up WhatsApp on your phone. Go to the settings menu (the little gear which looks more like a movie reel, and which is always on the bottom of your screen.) Within the settings menu, you will see “WhatsApp Web.” Tap on that, and the app will request access to your camera (this is so it can read the QR code.) Simply allow it, point it at the code, and next thing you know, you’re using WhatsApp on your iPad. 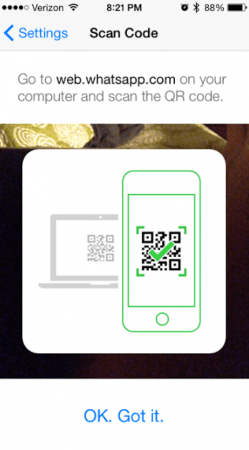 Now, this isn’t quite the same as a dedicated app, for a couple of reasons. For one thing, it will always be dependent on your browser. For another thing, your iPad is always going to stay in conversation with your phone. Messages you send will actually be sent out from there, so you’ll need your phone near by while using WhatsApp Web. Now this may raise the question, what’s the point of using it on an iPad if I have to have my phone handy anyway? Well, you can have your phone on hand — which is to say, in a pocket, or a desk drawer — and that’s good enough for the web client. Meanwhile, you’ll still be able to take advantage of the superior screen real estate of your iPad, in addition to whatever peripherals you use with your iPad, like a Bluetooth keyboard.

Unless you’re using Safari, you should have full functionality through the web client. If you are using Safari, I think the inability to use voice notes is the main limitation.

WhatsApp has resisted releasing an iPad port because everything through WhatsApp is based on your cell phone number, and iPads don’t have their own cell numbers. However, with WhatsApp web blurring those particular lines, perhaps we will be seeing an iPad app in the near future. In the meantime, rock out with the web client.

For more information, check out the WhatsApp FAQ on this same topic. If you have any questions, or if there’s anything you’d like to add about getting WhatsApp on your iPad, feel free to mention it in the comments.