You are here: Home / App / What Video Apps are Best for Me? 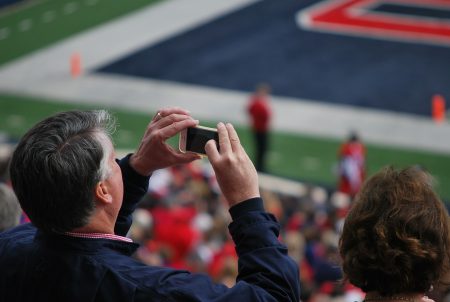 Remember when we were younger and technology was still so fresh and new? When we used to look at some sci-fi shows and for some think ‘that’ll never happen’ or ‘when will this happen?’. Well, video calling has been around in those conversations for decades. Ever since sci-fi books, movies and TV shows would show people communicating over video, the desire to chat and see the person at the same time has been at the forefront of many people’s technology wish-list. Well, a good decade into the world of smartphones, there’s plenty of great video calling options for mobile and desktop users alike. And for the most part, they’ve lived up to expectations, bringing family and friends together across the world in ways we didn’t think were possible twenty years ago.

Facetime has been around a while and is the stock video chat for iPhones. There’s a version for just calling, and both are available for phones and desktop alike. That means if you’re talking to someone on the go from home, as long as both of have the app. you can be in front of your laptop watching Netflix while they are who knows where. Obviously, the better data or WiFi connection the better, as users can record up to 720p in HD. You simply need to just access your contacts list after signing up with your Apple ID, then select the conversations you want to have and you’re fully immersed in the app. Some neat features included every device logged into your Apple ID will ring, just like back when people had landlines and when involved in a conversation, things in the background will give way to your conversation. This is an oldie but goodie, which has been around for a while and constantly improving. If you use an iPhone, you definitely need this app.

Those who watch Silicon Valley know that the band of regulars and heroes had created a video chat system that set the industry ablaze. It sent companies like Hooli scrambling to get together their own video chat. And while the show is a fictional comedy based on the IT industry, that actually happened after Facetime hit the marketplace. Google, though, has finally developed their own video chat called “Google Duo”, and it’s quite a challenge to the granddaddy from Apple. Its slick interface is easy to navigate, and you can use it whether you have an iPhone or Android device. One feature called ‘Knock Knock’, let’s you use a virtual peephole where you can view who’s calling before picking up. Likewise to Facetime, it works as smoothly on WiFi as it does on data, and you can choose to just use the audio call feature if you’re not in a setting where a video call is appropriate. It took a while, but Google finally came out with their own alternative to Facetime and it was well worth the wait.

Another regular on the scene is Facebook’s Messenger app. Like the in-site chat system, Messenger offers users a chance to chat via live video as opposed to the traditional typing conversations. Of course, both of you need a video connection, but this is a great feature in an already premium chat program. Chances are if you have a Facebook account or are using Messenger already that you are fully immersed in the offerings of the chat software, so adding video conferencing within the program is just an added bonus. And, it allows you video chat capabilities with people you have on Facebook but may not necessarily have in your address book to text with. If you are a regular Facebook Messenger app user, then try their video chat feature, and perhaps you’ll find it stands out above the competition.

Skype really is the granddaddy of video chatting. It’s established itself early on as the de facto, go-to app for video chats online, from the early days of poor quality cameras right up until now. A popular business app, Skype made communications easy over desktops when it arrived on the scene, as users could chat via text, voice or video, as long as the other user had Skype. This made things like conference calls and virtual meetings easier, and with things such as whiteboards and file transfers that are very easy, took away a lot of logistic problems by having everything in one program. Perhaps the only disadvantage nowadays with people having various brands of devices is that this is now a standalone program where the competition offers stock video calling which is just as good quality. But if you are someone has been using it for years and has a hefty amount of contacts, there’s no reason to shy away from it now. Bought a few years ago by Microsoft, it’s still the de facto video chat of choice for both Windows phones and desktops, and you can bet that the parent company is more than willing to continue to improve and integrate it into your every day chatting routines.

Another really popular video chat is WhatsApp. If you ever needed evidence that the app is popular, just look to a few months ago when it was down and people worldwide were caught in a panic that lasted for hours. There are millions of users who rely on this every day for their chats, which are with people on your contacts list of your phone. They also provide a desktop version in case your battery is dying or you’re working on assignments or projects. One of the best features of WhatsApp is how easy it is to share media, which is a huge bonus if your mobile provider doesn’t offer texting or MMS options. WhatsApp is a smooth-running and sleek looking app that you should try if the native Google Duo and Facetime services just don’t fit your needs.

What video apps are best for me?

In this blog, we highlighted some of the heavyweight video chat apps on the marketplace. There are others such as Viber, WeChat and ringID which are smaller but may fit your needs. Whichever app you choose, there is a comfort now knowing that video calling is not only possible but thriving. It adds a live element to things like your Snap or Instagram stories, and can really add to the overall experience of chatting with friends and loved ones. You can bring them along whether you’re on an exotic vacation or at the latest music festival. Soldiers and others who are constantly travelling don’t have to rely on clips or photos to update them on their family, as everyone can interact in real-time. Video chatting is here to stay and only getting better, it’s just a matter of what app you want to use and who you to call first.