You are here: Home / App / What Are the Top Apps for Downloading Music?

A few good songs can whisk you away to your own private world. All you need is a smart phone, a pair of headphones, and a good selection of downloaded music. In a world dominated by music streaming services like Spotify, finding a good app for downloading music can be difficult. Much like CDs, tapes, and records, they are a bit of a dying breed. They do still exist, though, and the following are the top apps for downloading music. 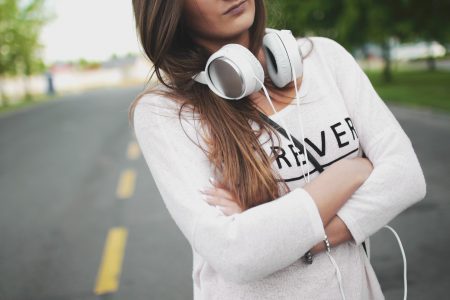 Simply put, there is no company that better understands that consumers want flexible control over their music library than Amazon. With the Amazon Prime Music app you can purchase and download just about any song ever released by just about any artist. Technically, like almost every app that allows music downloading, this is a streaming app. But downloading an owned song requires little more than the touch of a button, allowing you to store your favorite songs on your smart phone while using the near infinite cloud storage of Amazon to store the songs that you listen to less often.

The MP3 Music Download Super app does not have any streaming capabilities. All this app does is search for free music on the Internet and download it to your smart phone. There is no guarantee that the music found this way is legally available, just that it is free for download. While this program is generally light on features, it does offer the ability to search by lyrics, which means you can find that song stuck in your head, even when you don’t know the title or artist. Furthermore, this app searches music countdown lists from countries around the world, making it one of the best sources for foreign music.

RockMyRun is a very specialized music streaming service that also offers a downloading option. This service creates playlists that are specifically designed to support your exercise routine. The program can actually track aspects of your exercise style like your heart rate and recommend songs that match it. If you are looking for the ultimate songs to listen to while at the gym or out on the track, RockMyRun will build you a playlist which you can then easily download to your smart phone for every day use.

MP3 Jam is the best of both worlds if you are looking for free music that is also legal to own. This music app has a statement of assurance on its main site that all music provided by the service is legal to download and that it does not use torrent services in any way. Despite only providing free music, MP3 Jam claims to offer over 20 million music tracks. Additionally, this app can download whole albums with a single click of a button. As the name suggests, all tracks are downloaded as MP3 files, ensuring that they can play easily on any type of device.

This app is notable primarily because of the streamlined approach it takes to music downloads. Tunee Music has a completely stripped down UI that is focused on finding the exact song you want and nothing else. This app provides every detail you would ever need to ensure you are downloading the right song. It displays the title, artist, and music time. If available, it provides an image of the album cover before download. And if you still aren’t sure you have the right song, you can even preview the entire song before download. Best of all, Tunee Music always filters songs to ensure that you are getting the highest possible quality download.

Shazam is the app for anyone who has every heard a song on the radio or television, but just can’t discover the name of the song. The Shazam app can listen to just a few notes of a song and identify it. The app then searches the Internet and finds a complete list of purchase and download options for that song. In short, this is the go-to app for anyone who regularly hears a song and says “Oh, I love this. What is the title?”

No list like this can be complete without mentioning the elephant in the room. Designed primarily as a streaming service, every song and album on Spotify can also be downloaded for offline listening. The only real downside is that it costs $10 a month, which is basically the same as an Amazon Prime account, without the extra benefits. Despite this, it is still one of the most popular music apps on the market.

Everybody marches to the beat of their own drums and these top apps for downloading music let you literally pick those drums. Whether you like hard rock, slow jazz, slick rap, or anything in between, these apps turn your smart phone into your own personal jukebox.

For once, you've got some time to kill. You could go on a walk, call your … END_OF_DOCUMENT_TOKEN_TO_BE_REPLACED

Playing games on your phone can be a great way to kill time, relax, or just take … END_OF_DOCUMENT_TOKEN_TO_BE_REPLACED