You are here: Home / Alternatives / Showbox For Mac Download – Macbook Pro and iMac

If there’s one universal truth that exists across all of Apple’s devices, it’s that getting non-proprietary, unapproved apps working on them can be quite difficult! Though ShowBox is a popular app (even if it’s not spoken of, often), getting it downloaded and ready on your Macbook Pro or iMac can seem like a troublesome and mysterious process. In this guide, we’ll cast away that shroud of mystery and also illuminate some of the things you need to know if you want to use ShowBox.

While plentiful guides exist for Windows users, getting reliable instructions for installing ShowBox on your Mac can seem like an exercise in futility. While the overall smaller Mac user base can be to blame for this, some of the faults also rest on Apple’s dependence on proprietary software. While this trend has helped Apple’s systems to remain exceptionally secure and efficient, it also makes certain apps and programs difficult to work with.

Apple isn’t the only side of this coin that provides difficulty, however. By its very nature, ShowBox is an app that doesn’t have a great many resources behind it.

Just as often as people look for guides showing them how to get ShowBox, they look to have a common question answered: “Is ShowBox legal?” The obligatory, immediate answer is, “No, Showbox definitely is not legal.” However, that isn’t stopping thousands of people from using it, and millions more from sharing and streaming content through similar apps all over the world. However, this guide wasn’t written for the sake of telling you whether you should use ShowBox, or not. If you made it this far, you must be somewhat resolute to take advantage of this app, thereby accessing a massive library of ever-changing content that you won’t find collected together anywhere else.

It does deserve emphasis, however, that you are taking some level of risk in doing so. Many users think that copyright laws only apply to media that you’ve downloaded and that streaming it follows a different set of rules. This is not the case, however; as far as legality is concerned, the two activities are one in the same. Therefore, proceed with caution!

Getting the ShowBox .apk for Your Mac

The first thing you’re going to need to do is to find a copy of the ShowBox app. Without sourcing one yourself, you won’t be able to run the app. We’ll tackle this first since it will the most time-consuming part of getting ShowBox running on your Mac. 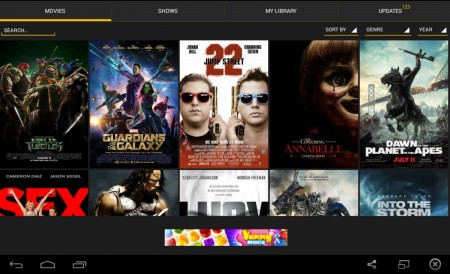 Since there’s no app store that’s going to have ShowBox readily available for you, a search engine is going to be required in order to get ahold of a copy. Simply type “ShowBox .apk” into your search bar; within the results, you should be able to find a copy of the app available for download. Note: You’re going to want to be running anti-malware and anti-virus software while finding the application file. Due to it not being distributed on any secure platforms, this type of file is very easy to infect with malicious code that could harm your computer. That being the case, you’re far better off being safe than sorry, and you should certainly obey any warnings offered by your security software while performing this search.

Any version higher than 4.0 of the ShowBox .apk should run just fine on your Mac once we’ve collected the necessary files and software. Once you’ve found your copy of the app, download it and keep it somewhere easy to remember. Whenever I’m downloading any .apk file, I keep it in a separate folder on my computer’s desktop for easy access.

Find an Android Emulator for your Mac

Now that we’re ready to find an emulator, we can be glad to have all of the tiresome searchings over with. Whereas the legality of apps like ShowBox is highly questionable (read: illegal), emulators such as the one we’ll use to run Android apps on your Mac are perfectly legal. Not only that, it can be extremely handy to have this type of software installed. How many times have you seen an Android-only app that you’re unable to use due to only owning an Apple device?

Of course, there are plenty of Android emulators available online that might serve your purposes. Finding one that’s compatible with Mac computers isn’t even that difficult, given their popularity. We’ll briefly look over a few of my recommendations, and shed some light on what makes them good choices.

Once you’ve managed to get ahold of a suitable emulator (don’t feel the need to spend too long choosing), you’ll have everything you need to get started on ShowBox. Simply boot up your emulator, and load in your custom .apk application.

As you’ll see upon first loading the app, ShowBox is surprisingly intuitive for an app with such a shady reputation surrounding it. Regardless of that ambiguous shadow cast by the app, navigating its interface in order to sift through the various films and television programs it offers is a simple thing. During your time spent with ShowBox, you may notice that certain media becomes inaccessible. Because much of this content is being hosted on servers distant from the US (but no less legally), it will occasionally be taken down and have to be rehosted before you’ll have access to it once again.

If you’re willing to take the risk, ShowBox can offer you a wealth of streamable content that has no price tag attached to it. Don’t let anyone convince you that it’s an imaginary risk, however. The production companies and creative talents responsible for making this content are cracking down on copyright laws more and more. Indeed, a day may be coming soon when apps like ShowBox will have a very difficult time existing.

For now, however, ShowBox is ridiculously easy to set up on your iMac or Macbook. Emulators are lightweight programs, and even though you’ll be required to access the app through the Android OS, it’ll run no less smoothly because of where you’re hosting it. It’s hard for me to recommend that you give ShowBox a try, given the inherent risks that will always be present with this sort of application. If you have to search for it off of an app store, or if you have to sideload it at all (with a .apk that you found on your own) those should be red flags enough that what you’re doing isn’t exactly approved of or encouraged. However, the steps above are certainly educational enough for you to see it done. Have you tried to use ShowBox on your Macbook Pro or iMac? If we missed anything, or if you’re simply eager to share your own experience finding and downloading this app, post in the comments below!