Did you know you’re a few Instagram hashtags away from limitless popularity where you can get hundreds of followers every single week? Most people limit their tags to simply 1 or 2 that are often times not the best thought out but often times you can come up with great alternatives if you give it some thought.

Like with most things, a little extra effort will get you a lot more results and I’m here to show you how to get those results so you’re not missing out on extra followers and likes for your photos.

Let’s take a step back though, and write a bit about what hashtags are and how to use them properly. If you’re unaware of the concept of tagging a photo, I’ll explain how to use them and why they’re such a powerful tool on Instagram to connect and share.

“I had never considered using a hashtag anywhere other than on Twitter, but now I’m inspired. Text messages have always seemed a little flat to me, so the murmuring Greek chorus of a hashtag might be a perfect way to liven them up and give them a bit of dimension.” – Susan Orlean

What Is A Hashtag?

You may or may not remember when this symbol # was called a pound sign. However, since the rise of Twitter, the pound symbol has meteorically risen in popularity and has been rebranded as the hashtag. It’s a simple yet effective way to catalogue an incredibly complex and unorganized mass of data. The hashtag symbol before a string of characters with no spaces denotes a category that the post is then associated and tagged to. For example, if you post an image on Instagram and include #coffee to the photo then anyone else who searches for #coffee would find your photo.

Chris Messina, an ordinary Twitter user developed the use of a hashtag on Twitter and since then it has been incredibly popular tool. It has since been adopted by most other major social media platforms, including Facebook and Instagram.

how do you feel about using # (pound) for groups. As in #barcamp [msg]?

The hashtag has grown into so much more than just a simple way to catalog different posts, it’s become a social media tool to connect disparate people to one another and join for a common goal or interest. It will be incredibly interesting to see how the hashtag develops into the future and how it is used 10 years from now.

Before we jump into the most popular Instagram hashtags, let’s go over some criteria so that you know what you’re doing when using them and will be able to use them to their maximum benefit.

Tip 1: The limit on Instagram hashtags per post is 30 so make sure you think about what 30 hashtags you’ll want to use as you can’t post them as much as you want.

Tip 2: If you find yourself in need of a few more hashtags, you could simply comment on your own photo with more hashtags but eventually Instagram will bar you from adding any subsequent hashtags.

Tip 3: If you have a private Instagram account, your hashtags won’t show up when someone does a search for them.

Tip 4: You can only tag your own photos with hashtags and you can’t include weird symbols such as % or a $ sign. 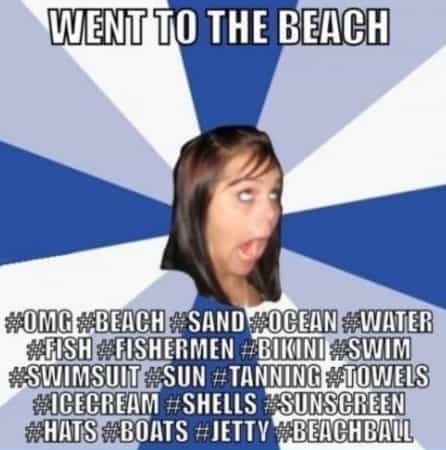 To post your own hashtags all you have to do is type a “#” before a word or words without spaces. When you type this into the description portion of an Instagram post it will automatically turn it into a hashtag.

If you post something and think of more hashtags you’d like to include later you can always navigate to the post and tap the 3 dots on the bottom right of the photo. Then tap the edit button and you’ll be able to change the post to include more or different hashtags.

Keep in mind that they will still show up down the list when people search for that given hashtag, it won’t show up at the beginning as it’s ordered based on the newest to oldest post.

Now, let’s get into the top 1000 most popular Instagram hashtags and give you some ideas for what to use in your own photo no matter if you want to gain more followers or simply want to share your posts with more people that like the same thing you like.

It’s a good idea to have a mixture of generic and popular hashtags along with more unique and specific hashtags. That way you are likely to get eyes on your photo both from random individuals but also from people that like your unique style or photo. A lot of times if you use the most popular tags then your photo gets to the bottom pretty quickly and you won’t be able to get a lot of people to view it. I hope you liked the most popular Instagram hashtags and got a sense for how to use the tags and how popular they are in every day life. Leave a comment below with your favorite tag and let us know if you found any ones above that are your new favorite.