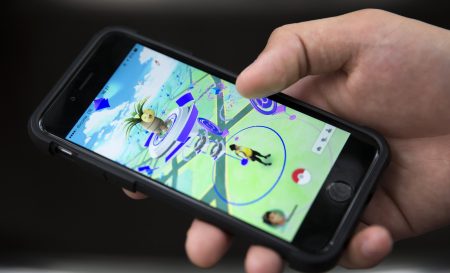 Pokémon Go is one of the world’s most popular mobile games, but it also can be one of the most frustrating ones to play. While the mechanics of the game are simple, the initial game was riddled with bugs and glitches. These errors would cause a white spinning Pokéball to appear in the upper corner. As long as the ball kept spinning, the screen would stay the same. Fixing a frozen game is easy, just annoying.

What Causes Pokémon Go to Freeze?

Games always seem to freeze at the worst times. For Pokémon Go, this is usually while capturing Pokémon. After the ball closes and the yellow sparks indicate a success, the game will pause. The game may also freeze after the Pokémon is caught while the ball is shaking on the floor. Other players experience the game freezing after an egg is hatched or when trying to access a gym.

One of the biggest issues Pokémon Go had upon its release was dealing with the large number of players. Niantic knew Pokémon was popular, but they didn’t know millions of people would download it during its first week. Because of this unexpected amount of traffic, many of the servers experienced issues with lag.

Lag issues were most common when multiple people tried to catch the same monster at the same time. Server issues also occurred when large groups of people looked for Pokémon in the same location. Most of these issues were fixed in the early game updates. Shutting down third-party apps that used Go’s server data also helped to fix this issue. A complete list of updates can be found here.

The other issue was the devices themselves could not keep up with the demands of the game. Pokémon Go uses a phone’s built-in GPS tracker at all times. This doesn’t just drain the battery faster; it means the device has to prioritize its functions. Running multiple programs at the same time, for example, could make each one more likely to freeze.

Keep in mind that other Pokémon mobile games don’t normally have this problem. The difference lies in the quality of the graphics, camera and GPS usage, and overall size of the game.

While having your screen freeze in the middle of catching a monster or hatching an egg can be annoying, there are ways to fix the issue. Explore these potential solutions to immediately resolve the problem or prevent it from happening. You’ll be surprised just how simple fixing a frozen Pokémon game can be.

If you are having consistent problems, you may need to upgrade your device. Pokémon Go phone requirements can be found here. Currently, the game supports Android 4.4 and higher, iPhone 5 and higher, and iOS 8 and higher. Players also need updated GPS services and a strong Internet connection. Even some phones produced in 2016 do not meet these requirements.

Pokémon Go may require a strong Internet connection, but it may not need LTE. Some iPhone 6 users have reported on Reddit that turning off the LTE service can make the game run smoother. To do this, go to your phone’s menu and select cellular data options. You should see an option for “enable LTE.” Swipe it into the off position and try playing the game again.

Wait for the Game to Fix Itself

Usually when the game “freezes,” it is not permanently frozen. Instead, it is just lagging. Because the game is still running, it will eventually fix itself. This doesn’t typically take more than a minute or two. By waiting, you will also reduce the odds that your capture won’t count or that you won’t get experience.

This is the oldest tech support trick in the book. The easiest way to get the game to unfreeze is by restarting it. After waiting a minute, force close the game on your device. Then, simply start it up again. If the problem persists, you can also try restarting your device entirely.

Unless the other apps are necessary, you shouldn’t leave them open. Modern phones try to run all programs to the best of their ability, but they can still get overwhelmed. Even just running an Internet explorer, email program and a messenger in the background can be enough to bog down your phone. If you can, select the “close all” button when you force restart the game. This will help you to make sure Pokémon Go gets the most attention from your phone.

Update to the Latest Version of Pokemon Go

Niantic is constantly releasing updates for Pokémon Go. Within the first few months of its release, Go had been updated at least 7 times. Many of these changes were unnoticeable, but they all served a purpose in reducing lag and eliminating bugs. Pay close attention to current Pokémon news articles for more information.

What to Do If Your Game Keeps Freezing

Niantic is always concerned by bugs and glitches. If your game always freezes in a certain spot or you encounter the same error over and over again, you should report it. By taking the time to notify support, you are helping them become more aware of problems gamers face. This allows them to start working on new updates, patches and fixes.

One of the biggest benefits to playing a popular mobile game is the amount of attention it gets from the developer. Niantic is always improving their games to exceed player expectations.

Pokemon Go is always changing and evolving. To learn more troubleshooting techniques or uncover some unique tricks to make gameplay easier, check out this article.