Hey, there, music lovers! And by music lovers, I don’t necessarily mean people who just love listening to music (although I do sometimes want to talk to you). No, this time, by “music lover,” I mean the people who make music. If that’s you, and you’re coming to a place where you’d like to mix your own sound, then odds are you’re on the market for some good sound mixing software.

Now, a lot of (let’s hope) well-meaning people may pull you aside from time to time and say “Dude, use GarageBand!” And while this is, on the surface, good advice, it tends to overlook something important: GarageBand is exclusively Apple software, and you may not want (or be able) to drop a couple of grand on a Mac just to be able to use one app.

Well, we feel you. We here at Appamatix have done a lot of investigation to see what people are saying about PC equivalents and alternatives to GarageBand, because, despite some really successful marketing in the late 90s and early 00s, Mac users do not have the monopoly on artistic creativity.

It’s cruel, you know, that music should be so beautiful. It has the beauty of loneliness of pain: of strenth and freedom. The beauty of disappointment and never-satisfied love. The cruel beauty of nature and everlasting beauty of monotony. — Benjamin Britten

Before we dive into the main event here, I’d just like to get a couple things off of my chest about platform choice. And since you’re looking for PC GarageBand alternatives, then I’m guessing I’ve got a sympathetic audience right here.

Can we for once and for all just admit that both Macs and PCs can be great machines? Because I feel like there’s this culture war going on just beneath the surface of the tech community. Granted, it’s not quite as strong as it once had been (I point you again to my comments about the late 90s), but it seems like as soon as you tell people your platform of choice, you’ve alienated half of your audience.

If you say that you use a Mac, people assume that you like to imagine you’re a rule-breaker (who uses incredibly popular hardware, for some reason), or that you’re just generally a snob — or even that you’re a technological idiot who can’t work your toaster without calling an Apple Genius.

Meanwhile, if you say that you’re a PC user, you get condescending comments about unreliable hardware, or how your software is all Mac-derivative, or you just have to face that tacit implication that you’re only using a PC because you’re too poor to use a Mac — but you secretly have Mac envy! 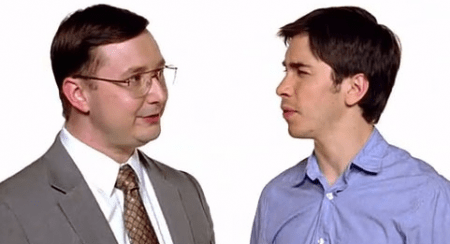 Can we put that to bed once and for all? Because I feel like it all comes down to the cost — and I don’t just mean the comparison. I mean that once you plunk down how ever much you’ve paid for your machine, you want to feel like you’ve made the right choice, and that often means siding with the army of your fellow users and plugging your ears against any indication of the virtues of the competing platform.

And I feel like some of the recent tech decisions on the part of Apple have made things worse: because now that there are so many devices that can integrate with your Mac, it creates a pressure (once you buy a Mac) to buy nothing but Mac products for every need: You must have an Apple Watch (when maybe a FitBit would do nicely). The only choice for a tablet is the iPad (whereas Surface is a solid machine.) For phones, it’s iPhone or bust (don’t even say the A*****d word). And when it comes to your MP3 player, it haaaas to be an iPod — there’s no way you would… Actually, that one’s probably true.

All this to say, sure, the native software suites and apps on each device is better tuned towards different needs. And sure, maybe the native setup of a Mac is better for people who want to do graphic design (although given the variety of PC components, that’s not necessarily true), but the truth is that some Mac users like to code and do their taxes in long form, and some PC users are in bands and design their own album art.

*(okay, so in the above rant, I left out Linux users. But they’re used to that.)

So if you didn’t bring up this article specifically because you’re looking for GarageBand alternatives — perhaps you’re just a regular Appamatix reader curious to see what the newest article was — then some basics on GarageBand. If you are familiar with GarageBand, then please be patient — it’s just courteous rhetoric to define your terms.

GarageBand is an app in what was once called the iLife suite that comes natively bundled on all Mac devices. Whereas Photos is for managing your, erm, photos, and iMovie helps you manipulate video, GarageBand is a really robust app that lets you edit multi-track sound recordings. You can splice tracks, layer them, split them, manipulate levels… you can also record in-track (or import audio files you already have).

The only hitch, which I mentioned before the jump, is that GarageBand is exclusively part of the iLife suite. Of course, within the last two months, Apple has released an iOS version of GarageBand. This means if you have any kind of mobile Apple device (and the entry point for these is much lower than it is for an iMac or MacBook), then you can use GarageBand (after a fashion at least) after all. This is a mobile version, and so there is limited functionality (fewer instruments to choose from, and — since this is still a very new app — some attendant glitches), but it is an option for you.

Below are some PC-friendly programs you can use for your sound editing needs. Know that, at Appamatix, we are usually trying to find free alternatives for the cost-conscious tech-lover. However, this is some pretty specialized software, so there aren’t going to be a lot of (great) options for free. It all comes down to what you want it for: if you’re a hobbyist who just wants to play around, then sure, one of the free ones may be enough. But if you are serious about sound design, you may want to consider one of the paid versions. After all, even the most expensive software package we talk about here is cheaper than buying a MacBook.

Our first one up has a huge plus because it doesn’t require any downloading. Soundation is an entirely web-based applet that will let you do a lot of the things that you would do in the fancier installation packages. If you look at the infographic below (taken directly from the Soundation website) you will see that there are several tiers of pricing, ranging from free to $99 a year. These tiers are actually one of the things that I really like about Soundation: not only does it give you a chance to try out the Soundation experience, you can also see how you yourself take to sound editing. So if you’re not sure just how committed you are, you can always start on the lowest tier and upgrade (or, later, downgrade) however meets your needs.

Of course, there are a couple of really big drawbacks. For one thing, all that pricing is per year. Many users may be willing to pay a pretty steep price tag, but only want to pay it once. (This is why I don’t like the new subscription model for the Microsoft productivity suite). Second, this is entirely web based.

Yes, that is also a plus, because you don’t need to install anything or worry about software conflicts in quite the same way, but that also means that if your WiFi isn’t 100% reliable, there will be times that you are locked out of your own work, which can be frustrating to no end.

If you’re looking for a free piece of software that’s been fairly well received by the music community (in fact, this one has its own music community), look no further than LMMS. LMMS is open-source, free software. This is not the demo version of any kind of app, nor is this an ad-strewn nightmare. This is clearly a labor of love — a painstakingly put together app developed by a wide array of music-loving programmers.

Of course, this does come with a downside — since it’s a labor of love, making its way on donations, you can’t exactly set your watch by when the updates will come out. Also, the UI is nothing particularly great to work with. But oh heavens, does this one have some features. Listen, if you’re unsure of anything, download LMMS and give it a try. You can easily lose a few evenings just exploring its myriad filters, track tools, and settings.

Depending on how long you’ve been on the internet, and if this is your first time looking for PC alternatives to GarageBand, you may have come across FruityLoops before. No, not the cereal: I’m referring to the Belgium-based design team that produced some of the best Apple-competing sound design software out there. Well, time has gone by, and FruityLoops has rebranded itself as the much more professional sounding FL Studio.

This app is pretty user friendly, so don’t feel like you have to have a degree in sound engineering just to look at it. It’s approachable for people of all levels of experience. However, the $99 price tag may scare some people off. There is, however, a free demo with almost full functionality. There are only two limitations to the demo version: 1) intermittent white noise bursts in your recordings (like a watermark that shows up in a video) 2) you can save your projects, but you can’t open them again. Don’t get me wrong: you can render to .wav, .mp3 .ogg or .mid files prior to saving a demo project, so you can still produce usable audio files, but if you were planning on going into the raw data again and working with that, you’ll need to upgrade the to full version.

One thing that you may find particularly attractive about this one is that it’s more than just sound design — it’s also a sound board. You can run shows from this app. And given its great UI, it’s a great one just to play around with, to see what it does.

If you have any PC alternatives to GarageBand that you like to use that we didn’t mention (and yes, I looked at several that I ended up not talking about) feel free to mention them in the comments. Rock on!

For once, you've got some time to kill. You could go on a walk, call your … END_OF_DOCUMENT_TOKEN_TO_BE_REPLACED

Playing games on your phone can be a great way to kill time, relax, or just take … END_OF_DOCUMENT_TOKEN_TO_BE_REPLACED