You are here: Home / App / Is Clash Of Clans Gem Hack Real?

If you have heard about a Clash of Clans hack then you must already play the game and have realized how difficult it is to earn gems. It is a rare but important currency in the strategy game. You are smart to ask about the legitimacy of the hack before trying it out because you will be very disappointed and regretful if you tried it without asking. Is the Clash of Clans gem hack real? Well, yes and no. 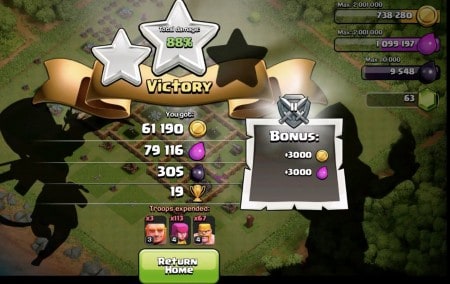 What Are Gems Used For in Clash of Clans?

First you should understand the importance of gems in the game and why people are willing to hack their phones to obtain them. Gems can be used for several purposes in Clash of Clan:

See how important gems are? The problem is that you don’t obtain gems easily in the game. That is because the game makers (Supercell) want you to spend actual money on gems. It is how the company makes money on a freemium game. You don’t want to spend money so you are tempted to try out one of those hacks you keep hearing about.

What Are the Clash of Clan Hacks?

There are three types of hacks you might hear about on the Internet about obtaining Clash of Clans gems free. They are using a generator, hacking your device, and using a modded version of the game. Let’s take a look at all three options:

These websites are scams to trick people into providing them with personal information. Many require that you fill out certain surveys, perform tasks, or sign up for offers to get your free gems. As you work your way through the requirements you hand over your personal information (email, address, phone number) and never receive a single gem once complete. That’s because these websites can’t get into your account and give you free gems. They now have your information and will bombard you with scam calls, emails, and texts.

The hacks usually involve downloading files and programs and then messing with settings within Clash of Clans so you can change the amount of gems you have. These hacks are real and do work. That is, they work until Supercell figures it out and bans the hack. Which they always do.

As you can see, Clash of Clans hacks are real but they aren’t safe to use, are regularly shut down, and you will be banned from the game if you use them.

How to Safely Earn Gems in Clash of Clans

There are some tricks to getting gems in Clash of Clans without cheating. It won’t be as quick as cheating, but it will make things easier. Use these tips to obtain gems easily:

You can keep making use of this trick by letting bushes regrow. A bush will regrow as long as it has a space and the eight spaces around it free from any buildings or decorations. It will grow back after 8 hours and you can remove it for more gems. Keep those spaces open so you can keep reaping the rewards.

You must claim your rewards when you complete an achievement by tapping the “claim reward” button in the menu. If you don’t do that, the reward just sits. Always keep checking the achievements because you never know when you might complete one without realizing it.