The clamor has become almost as loud as the music itself, as Windows users continue to beg Apple to release its popular recording and music editing software, GarageBand, for Windows PCs. The unfortunate news of the day, then, is that we still don’t have a version of it for the most recent Windows operating systems (7, 8.1, or 10). Many users think this means that Windows doesn’t have an equivalent alternative, but we’re here to tell you that isn’t quite true. Even though GarageBand is a fantastic piece of software, there are other, more widely available programs that can achieve the same results on Windows PCs. Read on, to learn about them!

Apple’s iron-tight grip on its own software and hardware is more than just a reputation, anymore; it’s something that we can go ahead and assume is implemented with each new product that Apple puts out (with the exception of the excellent Apple Music, but we can talk about that in a different article!)  In spite of this, one of the things that make GarageBand so highly sought after–along with many other Apple apps–is the fact that it comes automatically bundled with every new Mac computer, iPhone, or iPad that Apple releases. It’s part of the dedicated software suite that you get access to whenever you buy Apple hardware, and though there are good reasons that Microsoft doesn’t do the same thing with Windows, it doesn’t do much to reduce the longing on the part of consumers that want a good music recorder and editor.

This creates a further dilemma in that Windows users actually have a wide variety of software to choose from, while Apple’s GarageBand users are more than happy to rely on the excellent software that came with their computer. Having to choose a third-party program from a huge market can lead to consumers spending far more than they actually need, or worse, spending too little and never finding the right software for their needs. Are you a musician? A hobbyist? A professional recording artist, or sound expert? No matter where your particular niche is, our list of excellent GarageBand alternatives should more than keep you satisfied. By the time that Apple decides to loosen its grip on its proprietary software (if that ever happens) you may find yourself happier with an alternative than you ever would have been with GarageBand.

Our recommendations are going to vary from free, less powerful music software to high-end professional programs for those who truly need a lot of bang for a lot of bucks.

It’s an unfortunate thing to have to admit, but when you’re looking for an alternative to any Apple software, you’re usually going to get what you pay for. While Apple’s software comes bundled with Apple hardware, those users also pay higher overall prices for said hardware. Windows, meanwhile, is designed to run across a wide variety of systems from various manufacturers, economically and affordably. Therefore, the operating system doesn’t boast the same high-quality first-party applications that Apple tends to.

On the subject of GarageBand, however, there are some very good free alternatives that you can download, but that’s all going to be dependent upon your own needs. Without further ado, let’s dig into a few of these other options, wherein I’ll also point out any cost that’s attached to them. I’m going to be bold and put my highest recommendation at the top of the list. I’m a big fan of open-source software since it encourages niche communities to work together to build the sorts of programs and tools that the community in question would make the best use of. Look to VLC Media Player and VideoLAN Media Recorder as other examples of massively successful open-source software, and you’ll start to see the level that LMMS is on.

Though the aesthetic of the program isn’t anywhere close to the polish that’s displayed in GarageBand, you can nevertheless perform many of the same tasks. Mix, record, edit, and alter individual chords and sounds within each track, until the final product is polished and ready for the public. There’s a bit of a learning curve that comes along with using LMMS, but this is forgivable since the program is entirely free. You can download it from the hosting website, and it’s compatible with Windows, Mac OS X, and Linux. 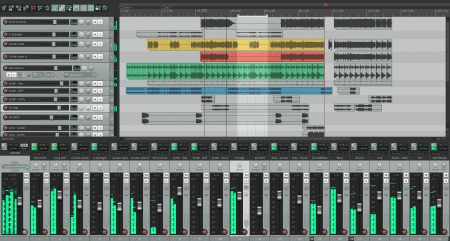 Like LMMS, Reaper is a multiplatform program that tries to “do it all,” and mostly succeeds extremely well at it. As with any music recording and editing software that touts its ability to finish professional-quality products, there’s going to be a steep learning curve before you’ll know all of its bells and whistles, but this is par for the course with a good program. Recording, mixing, processing and more are offered in this comprehensive option, and it comes at two different price-points for individuals—free and licensed.

The free version lasts for a full 60 days (two whole months!) before you’ll be forced to upgrade it to the full individual licensed software for $60. This may seem like it has the potential for sticker shock, but if you’re serious about sound editing, this is a slim price to pay for such a multifaceted program. Though FL Studio (now the redesigned version of ye olde Fruity Loops music mixer) has only a little overall resemblance to GarageBand outside of its functionality and features, I find it to be the best aesthetic parallel to Apple’s polished, streamlined software. I find there to be less of a learning curve with FL Studio than with many competing audio mixing programs, which is a huge part of its appeal.

However, this enticing visual appeal, streamlined design, and comprehensive set of features that even exceeds GarageBand in many ways doe come with a price tag. Though you can certainly download and test FL Studio’s free trial, the base purchased version will cost you $99. Added features will raise the price tag even more, which can be alarming to some users. A benefit amidst the cost is the promise from the FL Studio developers that you’ll always receive every update to the software without any additional cost–when a new version is released, you’ll be eligible for every update in the package without ever having to buy a new version of the program. It’s admittedly quite reassuring to know that your money is an investment, rather than a single purchase that becomes outdated as soon as a new version is released.

If you have the money to spare, FL Studio is my top paid recommendation for music mixing software. The last on this list of alternative software options is Mixcraft, brought to us by the Acoustica development team. While I find FL Studio to be the best paid GarageBand alternative, Mixcraft is probably the program that’s most similar to GarageBand overall. The layout and interface are different, of course, but the ease with which you can create music (whether you’re recording or using some of the loops available through the software) is very reminiscent of Apple software.

The icing on the cake for this particular recommendation is its integration of video editing features, allowing you to set a score to practically anything. This makes it more of a media powerhouse than many of the other offerings on this list, and as such, it’s a very close runner-up to FL Studio, which remains my top recommendation. Mixcraft is available to two price points, differed by the number of features available in each. If you’re just a hobbyist that’s getting started with music mixing, the standard version–Mixcraft 7–is available for $89.95. If you’re a professional that’s going to put the entire available kit to use, the Mixcraft Pro Studio 7 software is $164.95. Expensive, for sure, but it greatly amplifies the usage that you can get out of this nuanced program.

Of course, none of these applications is going to fully answer everyone’s thirst for a Windows version of GarageBand, and since Apple doesn’t seem particularly eager to fill that gap in the market with its own offerings, software competition is always going to result in a changing climate of improving software, altering the popularity of certain titles as new features are integrated. In short–an open market makes for a wild ride, but can lead to some great software being created.

Thankfully, “free” is still a viable distribution method, and open-source programs like LMMS will guarantee that an affordable alternative is always available for users to fall back on. Many enjoy GarageBand because it provides an easy way to learn the ropes of music mixing without the startup cost of expensive software, and it can be difficult to find an alternative on Windows that’s equally efficient. However, our list above should be more than enough to get you started.

Do you frequently work with music mixing and production? Are you a Windows 7, 8.1, or 10 user that’s found a viable alternative to GarageBand that we forgot to cover? If you have your own ideas about what makes for a viable PC alternative to this popular program, let us know in the comments below!

For once, you've got some time to kill. You could go on a walk, call your … END_OF_DOCUMENT_TOKEN_TO_BE_REPLACED

Playing games on your phone can be a great way to kill time, relax, or just take … END_OF_DOCUMENT_TOKEN_TO_BE_REPLACED