You are here: Home / Alternatives / FaceTime For Windows 10 Free Download

When Apple introduced its popular video calling app, “FaceTime,” to iOS, it was a runaway hit that immediately forced competing messaging and calling apps to play catch-up. The fact that it was available as a free download on iOS made it an even more compelling app, and now, users on other platforms are wondering if they have any avenue or option to run FaceTime on other platforms, such as Windows 10. We’ll answer that very apt question, as well as others, in the article below.

It’s hard not to see FaceTime’s influence springing up in all of its competitors’ more recent innovations. Ever since Apple introduced it, video calling–a phone call that offers a real-time view of your contacts’ faces as you speak to them, by way of a smartphone camera–has become the new standard for communications apps. WhatsApp Messenger will be getting the feature live sometime in 2016, while Facebook, imo Messenger, and even Snapchat all now support video calling.

Apple was hardly the first to realize that such opportunities were possible with our current levels of technology. Skype, after all, had long been the gold-standard for video, voice, and text conferencing between any number of people at the same time, and in spite of Apple’s takeover of smartphone and tablet-based video calling, it’s still widely turned to by businesses, professionals, and individuals.

However, what non-iOS users are clamoring for practically more than anything else is access to FaceTime from non-Apple devices. The sad truth of this state of affairs is that it is not possible, and is not likely to become possible without some serious shakeup in Apple’s proprietary software practices. Apart from iTunes and QuickTime Player, no other Apple software is currently available on operating systems that aren’t Mac OS or iOS. It’s a crying shame, and many are hoping to see this change somewhere in the future (anything can happen!), but as of right now, it’s an impossibility that can’t be overcome. 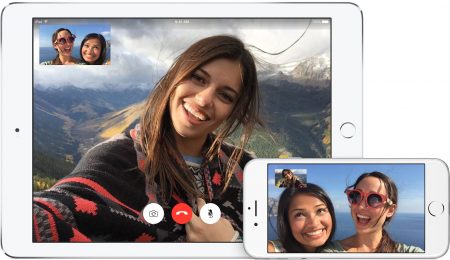 “Why not emulation?” some have asked. After all, if we can emulate the Android OS so easily, why can’t we emulate iOS in order to use FaceTime and other Apple apps. Again, this comes down to the rigidity and narrow control that Apple touts over all of its software. Android is meant to be a flexible operating system that can run on any number of platforms, but the same can’t be said of iOS; it’s intended for iPhones and iPads, without any other practical application beyond those.

In short, emulation is off the table, too.

That doesn’t mean we’re without options, however! We’re not going to conclude any Appamatix article without providing you with a wealth of well-regarded alternatives to the software that you want to use. After all, one of the benefits of Apple’s rigidity is that its competitors have definitely recognized consumer demand for services similar to FaceTime on other operating systems. They’ve risen to meet that demand, and it’s produced some more widely available services and apps that are just as good as (if not better) than Apple’s FaceTime. Considering just how widespread Facebook is, it’d be hard not to list Facebook Messenger before any other recommendation on this list. On top of that, I’ve become extremely familiar with it over the past months, as it’s risen to be one of my favorite messaging and calling apps on the market–even, in my opinion, beating Apple’s FaceTime.

It’s not hard to see why. Previously, Facebook’s messaging system was tied intimately to its social media platform, allowing users to send messages from within confines of the Facebook web page and the Facebook app. Although there was a small amount of upset when Facebook decided to launch its own, separate message app (the core of which is still accessible from within the Facebook web page), that app has since risen to be an exceptionally powerful too. It’s organized similarly to a text messaging app, with your entire messaging history available through an organized list of contacts. However, it excels far beyond your average text messenger with the sheer fact that it’s supported by Facebook, rather than the contact list on your phone.

Couple that with the immense financial backing capable of the Facebook platform, as well as the influence of the social media giants feeds and share system, and you’ve got yourself one stellar alternative to just about every other communication app available.

The only drawback is that you’ll need to be connected to each of your contacts on Facebook, which makes Facebook Messenger a bit cumbersome to use with people that you’d rather not be connected to in such a way. For all others, however, this is the FaceTime alternative that takes the cake for me. Access Messenger through an individual app on your smartphone, or simply through the Facebook website if you’re a Windows 10 user. Not far behind Messenger is Google Hangouts, another cross-platform chat system that has a huge number of benefits due to the system that it’s tied into. Just as it’s impossible to escape the massive presence that is Facebook, so too is it impossible to have missed Google’s climb to success.

Having a Google account carries no cost, but has an immense number of benefits, ranging from free email access at Gmail, free document and photo storage in Google Drive and Photos, and also free messaging services in Google Hangouts. You won’t be able to access Hangouts without that ever-important Google account, but once you have it, this is a pretty nifty messaging services that settle somewhere in between other mobile messaging platforms and Skype.

Like Skype, it’s a master of “conference” style video calling, where multiple people can share a video chat room together. Unlike Skype, it isn’t bloated by an intimidating number of features. It’s also a more lightweight app, which means that whether you’re using it on your phone, your tablet or your computer, it will consume fewer resources than its competition. Having already made plentiful mention of Skype, it’s about time that we get to it on this list! It’s especially significant because it’s been around longer than any popular video calling apps that are currently popular, and over that course of time, it hasn’t changed too much.

When it was recently acquired by Microsoft, the visual aesthetic of Skype was changed to give it a more modern, sleek appearance, which helped it to keep up with the trendier competition of Facebook and Google Hangouts. In spite of the rather intimidating and deep level of settings available in Skype, it’s still a fantastic messaging option with video-calling features that have remained above average in quality and efficiency after all of these years.

While it’s known for being a bit of a battery and memory hog, it’s become much better across all platforms through optimization (and it is available on all of them.) Like the above two recommendations, Skype is free to download and free to use, but as with any video calling feature, be sure to keep an eye on your data usage, if you’re using a cellular data plan. Video calls eat megabytes like popcorn. 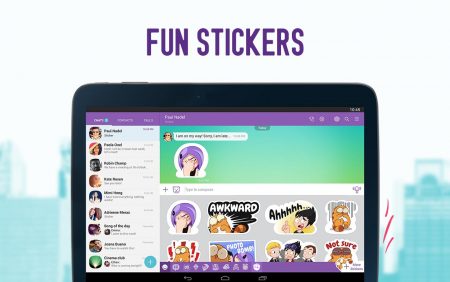 The only thing that keeps Viber from being higher on this list is the fact that the above options are so rich with features, or ties to other online media and networks. Like Skype, Viber has been around for quite a lot longer than much of its competition, and the hundreds of millions of users worldwide that still use it are a testament to its popularity and usefulness.

You won’t get any of the interconnectivity that comes from Facebook Messenger or Google Hangouts, but many users are just looking for a simpler solution that doesn’t bring with it an entire army of unnecessary bells and whistles. If that’s you, then give Viber a try! Like the above offerings, it’s free to download and use (and is especially good for international calling!)

Here’s another app that’s risen to the top of many app stores, lately. While the user base is global, with a majority of it being active in China, it’s nevertheless a stellar voice and video calling app that has all of the features necessary to succeed at each.

Unlike the other options, there isn’t exactly a native desktop app for WeChat, but that won’t stop you from enjoying it as a Windows 10 user. The WeChat website offers a portal that will allow you to use WeChat from within your browser, but you’ll need to have the app downloaded to a mobile device that can read QR codes, first.

Since practically everyone in the US is packing a smartphone these days, that’s not a particularly tall challenge! WeChat stands as a newer entry to the video calling app market, but its quick rise and bevy of useful features make it worth your while.

While any of the above recommendations can serve as an excellent stand-in for Apple’s FaceTime, you should take your time to see which one offers the types of features you’ll enjoy most. While FaceTime may be available free to iOS users, there’s currently no way to download it on Windows 10; we’ll have to make due until Apple changes its tune! Meanwhile, leave your questions and comments below!