To anyone that’s paying attention to the app scene, it’s no surprise that everyone is dubbing 2016 “the year of chat.” Features that were once considered advanced are cropping up in every app available on authorized app stores, including the popular messenger, Line. Much the same as other apps that it’s competing with, it now has the cross-platform compatibility that allows you to use it in Windows (XP, 7, 8, or 10) just as easily as you would on a mobile device. Where we once had to rely upon emulators to bridge the mobile experience with desktop computing, we can now rely on a native version of the app to achieve even better results. Read on, to learn more about Line and how you can use it to optimize your messaging experience.

Several features stand at the front of the crowd when it comes to modern messaging apps. Audio and video calling are among the most frequently touted, but even more than that, users are enormously eager for better cross-platform support between their smartphones and their laptop or desktop computers. If you think about it, that’s the obvious next step, right? As much as we clamor and cry for innovative technology, we also expect new features to trickle down to all of the tech that we’re currently using. What was smartphone exclusive becomes fresh and exciting again when it finds a home on desktop and laptop computers. What once required the strength of a desktop computer to run becomes a brand new feature when it’s flawlessly executed on a smartphone, and so on, and so forth.

Line has built itself up as a “do everything” messaging app that not only has the features that you want from a good messenger, but also the customization and personalization that you get with a social media platform. It has audio and video calling, along with text, image, and video messaging. You can add graphics and stickers to your messages in a way that’s reminiscent of Snapchat, but you can save all of your favorite messages and media too (which is something that Snapchat users are always going to be salty about.) However, if you’re a fan of Snapchat’s self-destructing messages, then you can easily set a “timer” on Line messages that ends them with the same result. 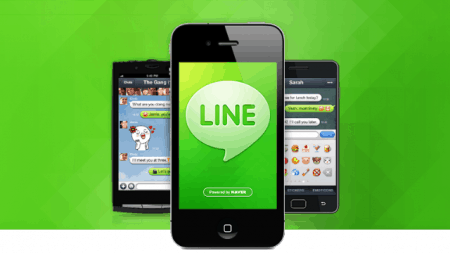 Although a massive amount of its popularity has come from Asian countries (especially Japan), anyone in the world can take advantage of Line’s features; it’s meant to be an international tool. In this way, you can even allow it to replace Skype when you want to keep in touch with friends and family abroad.

One might think that I was only talking about the mobile version of this app, from what you’ve read so far. For quite a few other messaging apps, this is the point where I’d say, “but if you want to use it on PC, we’ll have to emulate…”

With Line, that’s not the case. It has a fully operational, native supported Windows version that you can download just as easily as you would the smartphone version, and it’s only a click away.

There is one caveat that we have to get out of the way first, and that’s the fact that Windows XP isn’t going to be able to support Line. In the larger picture, this is understandable; Windows XP is an old operating system that’s already been outdated by several more recent versions of Windows (Vista, 7, 8, and 10). Many apologies, XP users, but if you’re still stuck on that old operating system, it’s time to start thinking about how you’re going to upgrade to one of the newer iterations of Windows.

For most users, however, that won’t be a problem. If you’re not already onboard with Windows 10 (you should be; it’s very good), then you can download a version of Line that runs just fine in Windows 7. That’s more than a decade behind current Windows innovation, and that makes Line a fairly generous messaging platform.

First, head to the Line website. Here, you can go straight to the download section, or get demonstrations and graphics that display all of Line’s features.

From the download page, you can see links to every version of Line that’s supported across multiple operating systems. You’ll also notice that Windows 8 and 10 have a separate listing from Windows. Users of Windows 7 should select the Windows download while 8 and 10 users should select the other. Easy, right? Not so fast, though! There’s actually a hidden option in here that might shape your overall enjoyment of Line, but it isn’t spelled out particularly clearly.

One of the features that Windows 8 and 10 brought to the operating system is apps. They work with a “tiled” aesthetic and were largely designed to mimic mobile applications in function and appearance. Needless to say, not all Windows users latched onto the idea, and many still preferred the original software installation method: downloading a .exe file an entry in your program directory.

Installation is just as easy as that initial download, so run the .exe once your download finishes, and you’ll be ready to go with Line in no time! It’ll be even quicker if you chose the Windows 8/10 version, but the aesthetic and function of the app will be just a little bit different.

Tips and Tricks for Line on Windows

Having access to Line on your Windows PC is a great start, but you’re going to have a lot more fun with it if you know about all of the various features that come along with this versatile messenger. We’ve already talked about all of the obvious ones: video and voice calling; text, image, voice, and video messaging. Did you know that it comes with its very own add-on store, though? Or that you can customize the theme of your app without ever using third-party applications?

Here’s a list of things that you’ll want to try and test as soon as you have Line installed:

Hopefully, this sort of versatility and cross-platform support catches on in the same way that other popular features have. Fans of popular messaging apps will be immensely thankful for it, and if Line’s millions of daily users can serve as a testament, it works. I fully expect to see Line’s popularity grow even further in “the year of chat,” to the point where it’s eventually going to be as popular (if not more popular) with youth in the US than the likes of Kik Messenger.

Of course, the benefit of having a messaging app on your Windows PC is made twofold if you’re using the same app on your mobile device, which is a move that I highly recommend for anyone who’s searching for a great messaging experience. Cloud syncing, saved conversations, and the constant contact offered by having your messaging wherever you are, no matter what device you’re on, can’t really be given a value.

Even though Windows XP users are left in the dust (sorry, folks!) those using 7, 8, and 10 can easily take advantage of Line’s features through a dedicated app, which is a far cry better than being forced to emulate in order to get access to the messenger that you want. If you have any remaining questions about using Line in Windows, leave them in the comments below! Let us hear your stories, and if you found our guide helpful, spread the word on Facebook and Twitter!