Though many may not realize it, some of the hottest commodity exports that are traded around the world are television shows and films from various countries. The prevalence with which we share our various types of media have made it possible to stream and download everything from live TV to movies, and today, we’ll give you a run-down on some of the best ways to get your hands on what you would like to view, including the Asianet serial “Parasparam,” frequently shared on Hotstar in the USA.

Getting ahold of programs that don’t seem to be offered through any of the major streaming and digital download providers can be a pain in the butt. Amazon Video, Netflix, Hulu, and others don’t often carry foreign titles, outside of those that are either classic (cult or critical) or currently trending among eager viewers. Additionally, anime. You can find that particular Japenese export just about anywhere.

What about other shows, though? Serials and soaps from India, Australia, Korea, Germany, or any other number of countries whose media only makes it to the USA in the form of films that perform well at festivals? There’s no easy or obvious source to find these or even learn about them if you’re an average internet user in the US. Worse yet, if you grew up outside of the States and want to return to some of the film or television that was meaningful to you in your native country, how are you to go about getting it if the big names in media streaming haven’t deemed it “popular?”

Luckily, there are a few ways to go about doing this, but even they can be difficult to find. Also unfortunate is the fact that many of the ways that people access mostly-unavailable film and television err on the wishy-washy side of copyright law. Personally, can we blame people for downloading what they can’t find elsewhere? Though I can’t condone it, as a writer who frequently indulges in media made outside of the US, I certainly can’t place blame on using P2P download services (peer-to-peer.)

However, that’s not the only way to go about it or the best. In the following article, we’ll discuss some of the methods that people are using to gain access to their favorite, if slightly obscure, films and television shows from Asian countries, via India Star programming. We’ll keep it as informative as we can, and if a particular method ever gets risky, it will be outlined so as to inform you that it’s risky. Mostly, the online content portal that we’re about to talk about is 100% legitimate and also free for you to use. Let’s get started!

We’re going to start off this list with one of the huge entities in television and film streaming through Asian countries, and that is, without a doubt, Hotstar. The easiest way to look at it (and seriously, look at the layout of the website) is the “Hulu for a different region,” especially since it markets its content in much of the same way, down to which genres and types of television are offered. None of it is live television, but it does provide an able way to stream otherwise unavailable content.

There’s more to it than the website, but it’s definitely a good place to get started. Even without creating any form of account, you can access hundreds of episodes of popular shows and recordings of sporting events that you might not be able to access, otherwise. Additionally, even though Hotstar features video content frequently primarily aired by Star India, the site itself has been translated into English. Wondering about the synopsis of a particular television episode? Not a problem, even if English is the only language you read in.

The most beneficial aspect of Hotstar, however, is the fact that it’s a 100% legitimate way to access this program. As an official streaming service, it provides entirely legal video media so that you won’t ever have to worry about the copyright infringement risk that comes along with illegal access to films and TV shows. This is good news, as Hollywood isn’t the only segment of the filmmaking world that’s cracking down on illegal downloading.

Before we look at other methods, let’s examine some of those genres and particular shows that make Hotstar such a hot commodity (I’m not even going to apologize for bad jokes, along the way.)

Finding anything besides the major US sporting events to watch on any of the more popular streaming services is practically impossible, so if you want to watch, say, a cricket match, Hotstar is a good place to start your search. This sport is actually where Hotstar got its beginning. Only brought online to air the many matches of the 2015 Cricket World Cup, it garnered such a huge viewership that Star India started bringing hours of its everyday programming to Hotstar. 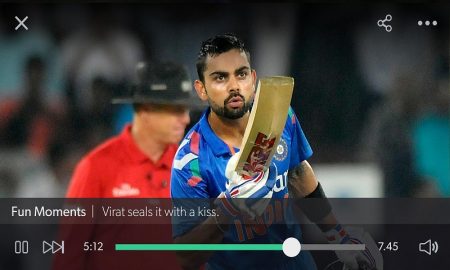 Tab over to the sports listing on Hotstar to see what I mean. Hundreds of hours of recently recorded matches and performances, free for you to view at any time. Whether you’re a die-hard cricket fan or someone looking to diversify their sporting interests, you’ll be hard-pressed to find a better place to do so.

Oh, soap operas and serial dramas. If you can find me an area of the world where this isn’t an amazing form of daytime entertainment, I would love to know about it. Indian television has just as many outrageously fun soaps and serials as Bollywood has exciting films, and the best way to access them–even with P2P and torrent downloading available–remains Hotstar.

If you’re looking for Parasparam, all 28 seasons (858 episodes) are available for you to watch. To boot, the streaming quality in the US is actually stellar, meaning that you won’t have to wade through an annoying abundance of commercials and you won’t have to wait for an eternity for your videos to buffer. If you think about how many hours of content that is in only one show, you’ll realize what an immense service Hotstar actually is. Mix in popular shows like Chandanamazha and Veera, and then combine it all with the surprisingly large number of US programs (some of which only come with a premium Hotstar subscription–sorry, HBO fans!) and you’ve got a wealth of viewing potential.

Of course, you’ll find the same mix of popular US program with a huge number of Bollywood films if you search Hotstar’s “Movies” section. If you’ve never before seen a Bollywood film, you certainly owe it to yourself to do so. Often bombastic, often exaggerated, but frequently a lot of fun, they’ll give you a taste of entertainment that just doesn’t get produced in the US.

Of course, newer releases from larger Hollywood studios are going to require premium Hotstar access, but that’s to be expected.

Hotstar on Android and iOS

If you’re primarily a mobile user, you’re not entirely out of luck. Since the Hotstar app is only officially distributed in India and Asian countries, however, you’re going to have to go through a few hoops in order to get ahold of it.

And, as usual, iOS users aren’t going to be able to do so without a jailbroken phone, and even then, the process is fairly fishy. Sorry, Apple fans! If we’re lucky, iPhones and iPads will be more easily able to load in apps similar to the way that Android does.

If you’re an Android user, you’ll need to find a copy of the Hotstar .apk (application file) online, and then “side-load” it onto your device after downloading it. This is an easy process, and all that you need to do in order to be able to install Hotstar is enable third-party software in your settings.

iOS and Android users aren’t entirely out in the rain, though. On these platforms, apps like India TV Live and Cricket TV HD will let you tune into several of the types of programming that are often made available on Hotstar.

Unfortunately, apart from the above services, you won’t be left with many different directions to turn to. Typically, P2P downloading runs an immense risk of copyright infringement, and it’s traditionally very difficult for users to know if they even are being risky with their downloads. Thankfully, as long as you have access to a Windows PC or Mac, Hotstar is available to you through a simple web portal. Since it doesn’t even require signup to use, you can get started watching content in it with only a few clicks.

Are you an avid viewer of content from outside of the US? Do you enjoy programming that falls outside of what we know as the “mainstream,” or are you a pro that’s been navigating foreign programming for as long as it’s been streaming online? Whether you’ve been using Hotstar or a download service, whether you’re a Parasparam fan or a cricket fanatic, or whether you’re a newbie who wants to get a taste of India’s live TV from in the US, we’re interested in what you have to say! Let us know how you like Hotstar and similar services in the comments below!