You are here: Home / How To / How To Add Text To Snapchat Photo & Rotate

Do you know the saying a picture is worth a thousand words? Every single picture tells a story that would take as many more than 1000 words to fully explain and analyze. You can take a superficial approach to looking at a photo and then there are opportunities to add a bit more depth and a bit more character to a photo without ruining the underlying meaning or creativity.

That is why this post will go into detail teaching you how to add text to your awesome Snapchat photo or video. I will teach you how to enlarge text, include both small and large emoji in your photo, rotate the text, and a lot more. After this guide, you will be an expert at manipulating a photo so that you can have the maximum impact when sending it to your friends. Believe me, you will want to save the image after you’re done using the techniques below.

Why Add Text To Snapchat

You may be asking yourself why you should add text to a Snapchat photo when it is completely good as is? The reason is because with the use of text and emoji or emoticons you can add a whole new level to your photos. For instance, if you take a photo of a party, someone may not realize it’s New Year’s Eve, or your birthday party, etc. In those instances you want to be able to tell whoever you send the snap to where you are, or what you’re doing.

Another reason, and this one is very important to Snapchat users (and the Snaps themselves), is that unlike most social media apps, Snapchat’s Snaps are self-deleting after a period of time set by the sender. Once you’ve looked at or watched the Snap, it is gone forever. And even while you’re still looking at it, if you look at it for longer than the time set by its sender, it will also disappear. To that end, it becomes extremely important that, whatever you want to communicate with your Snap, the person that you’re sending it to needs to be able to understand what you’re communicating instantly. Adding text, captions, colors, filters, sizing, rotation, or other elements can go a long way toward communicating your point quickly.

Of course, since these Snaps are going away quickly, you don’t want to spend too much time on it. Why spend an hour perfecting something your friends will only get to look at for thirty seconds? Fortunately, Snapchat is so well designed that, once you know the following features even exist, you’ll be able to put them to use pretty quickly. After practice, they will become second nature!

You can use text to both clarify what the image is about or you can use it to add to how funny the photo is. Including both text and emoji, you can get a great effect on any photo. Add a hashtag to a Snapchat photo to poke fun of Twitter or Instagram hashtags. For instance, you could take a photo of a line in front of Starbucks and use the hashtags #waitingforcoffee #firstworldproblems.

The best part is that you can always change the text before you send it out. If you don’t like the way it looks or want to change it, just tap the delete button and start over, easy as that.

How To Add Text To Snapchat

The default Snapchat app has the built in ability to add text, you don’t need to change any of the settings. If you don’t already have the app, make sure you go to the App Store and download Snapchat. (Also, if you want to run it on your computer, we have a way to help you.)Keep a sharp eye, though, because as is the case with many popular apps, a whole bunch of new apps with very similar names eventually show up.

Once you have Snapchat, simply open it up to be greeted with the login screen. From there, you will have to sign up and create an account. If you already have an account you can simply tap the app to open it up.

From there, you will notice that the camera is on and you can either see whatever the back or front camera sees. Feel free to move the camera from front to back and vice versa to get a photo of whatever you’re trying to capture. If you’re taking a selfie, it’s much easier to use the front camera. Also, you can tap the little lightning bolt at the top left to turn on or off the flash. You will either notice a little “x” or no “x” by the lighting bolt. For some reason, a lot of people are nervous if they don’t use a flash. Perhaps stemming from the old film-camera days when people weren’t always sure if the picture even took if there was no flash. But the cameras on most phones these days are incredible, and are capable of such depth and sensitivity that you don’t even need a flash. Oftentimes, you won’t want one, as a flash tends to flatten everything out, but using the light that’s already present in the room (or ambient light) can allow for a much richer photograph.

To get started in doctoring your photos, first you’ll need a photo. Take the photo by tapping the circle icon at the bottom middle of the screen. At that point, you will notice an x at the top left, a crayon at the top right and at the bottom the ability to change how long people can view the photo, the ability to download the movie or image, and the option to turn the snap into a story.

To add text, simply tap the center of your iPhone or Android screen and a little text box will appear. From there, you can type on the keyboard whatever you desire. Note that if you tilt the screen from portrait to landscape mode you will be able to type more and have a longer sentence. However, you need to make sure this works with your original photo. TIP: After adding text, if you want to move it up or down, tap your finger outside of the text box to close the keyboard and simply slide one finger up and down to move the box wherever you want. That way, you can keep it outside of the main subject of the image.

You may already know how to add normal size text but you want to add large text so that it’s really bold and stands out. Lucky for you, it’s super easy to add large text and will surely get whatever you write noticed by anyone else who you send the snap to. One thing to note is that as you can see above, if you use the normal text, it is in a text box that is sort of dark grey with a big of transparency in it. The large text has no box and no background, just white text.

NOTE: They recently made the large text a built in feature on the iPhone so you won’t need to go through the steps below. I’m not sure if it’s built in for Android yet, however, so keep watching this space, as we like to keep these articles updated with the most current information. Also, if you have an older version of Snapchat, you will need to follow the steps below.

To add large text you will first need to turn that feature on in the settings of Snapchat. Follow these steps to turn the feature on. Now that you’ve gone through the steps to have the ability to add large text, simply follow the steps below to try it out on your own.

One of the cool new features is that you can now change the text color in Snapchat. This trick is only available for the large text so you will have to change the color in large text. However, if you want small text that is a different color, I will show you how below in the text rotate section.

If you want to change the color of text, follow the steps above to type using the large text keyboard. When you are typing you will notice a color bar show up at the top right. Slide your finger up and down on the color bar to change the text color to whatever you want. TIP: You can change the text color to black by tapping and holding down your finger on the color bar and then sliding your finger to the bottom of the screen without lifting your finger. You will notice the text start to turn black as you do it.

How To Rotate Snapchat Text

Snapchat just released an update that will allow you to now rotate any text to any direction you want. From slightly off from horizontal, to completely upside down, you can edit the angle of rotation all you want. This gives you even more options for customizing your Snapchat experience, and making your Snaps more unique, and more reflective of you. On top of that, you can make text both large and small while you rotate. This gives you ultimate control on what the text will look like when you finish.

To rotate the text, you will need to type using the large font size so follow the steps above to type in the large font. Once you get something that you like, simply use your index finger and thumb and rotate your fingers while holding them on the screen near the actual text. This will rotate whatever you wrote until you lift your fingers when you are happy with it.

On top of that, while you’re at it, you can both pinch two fingers or spread them apart to either make the text smaller or larger in real time. This gives you the option to have small text but colored. One cool aspect is that you can have your writing go off the screen so only part of your message is visible. Same as before, if you want to move the message around you can use one finger and drag the text box around the screen.

Rotated text looks just like the screenshot above. Below, I demonstrate making the letters super large so they run off the iPhone screen. You do that by simply swiping your fingers apart to enlarge the text. 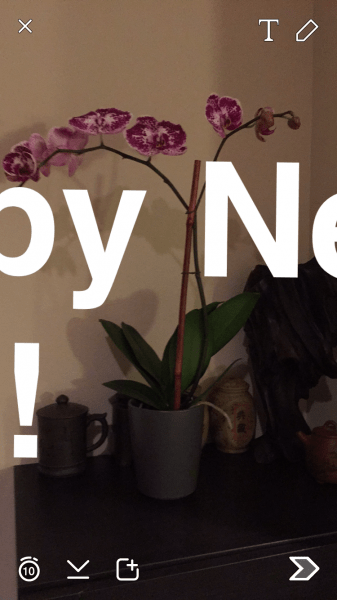 The last trick I’ll show you is how to add emoji to your Snapchat photo so that you can use the secrets above along with some awesome emoji to get the best out of an image. Sometimes, words just aren’t going to capture what you want to say, whereas a simple image can really communicate your impressions. You will need to go to your iPhone or Android’s keyboard settings and turn on an emoji keyboard for this tip to work. You can also download an external emoticon keyboard that will let you have more options.

Now that you’ve typed a few awesome emoji onto your image, you can use the techniques above to rotate, shrink, and enlarge the emoji to fit exactly what you want. See image below for an example. That wraps up this guide teaching you how to add text to any Snapchat photo or video. I hope this has been helpful in demonstrating the multitude of options when it comes to your very own snaps. Let me know in the comments what you like best and what features you use. As always, we appreciate it if you share this post if you found it helpful!