By now, we all know that celebrities have joined their multitudes of fans on Snapchat. However, K-Pop fans may be surprised to know that a startling number of their favorite musicians and performers are already on board; here are a few of the Snapchat names of the K-Pop genre’s biggest stars.

If there’s one massive thing that we’ve learned about the digital era, it’s that both youth and celebrity culture can be used to predict what’s going to be popular, and more importantly, what’s going to remain popular.

With Snapchat’s millions of users, we can make some pretty safe assumptions. Given that the majority of those users are young, our safe assumptions become assurances. Ice the cake with hundreds of celebrities, and you’ve practically got a guarantee. You’ll be hard-pressed to find members of any social group that isn’t on Snapchat, and while it might have been regarded as a social media platform for teens a few years ago, it has since matured into a hugely capable communications tool. Thankfully, it hasn’t lost any of its fun during all of those growing pains.

Snapchat capitalizes on the short bursts of media that have always been a part of its experience. Snaps are the way of the land in Snapchat, and they encourage quite a lot of candid communication with one’s fellow Snapchatters due to the “self-destructing” nature of the media shared, there. Because there are no looming “feeds” that constantly retain everything you’ve ever shared or said, people tend to be a lot more free with their communication.

It’s a liberating social media experience, and that goes for celebrities as well as users like you and I. As far as the Snapchat experience goes, we’re all in the same boat, and that feels pretty good.

Celebrities don’t have to take any extra steps to market themselves on Snapchat, either. They can do the same exact things that other Snapchatters are doing and still manage to please their waves of adoring fans. On top of that, Snapchat gives everyone the “instant” satisfaction of communication that comes along with communication tools such as Twitter but manages to accompany your activity with fun graphics.

More important than any of that, however, is the new ways that it allows people to be interconnected. Geographic and cultural difference are still huge barriers for many fans of imported music, and that holds especially true for lovers of K-Pop. While the internet and the digital era have certainly made it easier to keep up with your favorite music groups, other social media options don’t allow for the same freedom of expression as Snapchat possesses, and nor do they encourage such candid communication.

In Snapchat, it doesn’t matter where you’re from. The visual aspect of Snaps is what matters most, and nothing transcends boundaries like visual communication. This is an additional reason that so many people readily hop aboard the Snapchat bandwagon, and it’s a reason that you’ll find the presence of several of your favorite K-Pop artists here, as well.

You’d better believe it! If you’re not up-to-speed on current trends in music, then let me tell you right here and now that K-Pop is exploding. This isn’t a particularly recent trend–it’s been popular among US listeners for quite a while–but that popularity is ramping up in a large way, and individual artists within the genre are catching more spotlight than they have before. If you’re a newcomer to K-pop, then I’ll also urge you to allow a little bit of it onto your listening radar; it has the same energy and passion as the pop music we’re used to, but is presented with fresh voices and from new perspectives that will give your ears all kinds of interesting sounds and lyrics to work with.

A short-form of “Korean pop,” K-pop originated in South Korea and has grown to encompass most pop music that’s created within the country. It carries its own, unique styles and sounds which often are presented in ways both new and familiar through music videos and albums.

Sometimes, the trend of celebrity is the best way to introduce new people to the genre. Do you remember Psy’s “Gangnam Style,” the K-pop hit that took over radio broadcasts for years? That’s only the tip of the iceberg, my friend; the whole, wide rest of the genre has tons of interesting music to offer you.

Below, you’ll find just a meager helping of K-pop artists that currently maintain an active Snapchat presence that’s open to their fans. Look forward to clips from new music videos, previews of songs, as well as moments from their personal lives that will speak to you on a greater level than any shared professional accomplishment. These are the people that you want to follow if you’re ready to dig into K-pop.

Min (@therealminnn) Alongside Irene Kim of K-Style, Min (of miss A) was one of the first Korean celebrities to embrace Snapchat as a way to connect with followers and fans. She’s the lead vocalist of her group and has stellar performing chops. Look forward to every Snap that she shares with her fans.

Eric Nam (@ericnam) Born and raised in Atlanta, Eric Nam has embraced everything it means to be an “idol.” He’s a singer, a performer, and has also had success as a television host. Count on his Snaps being down-to-earth and expressive; indicative of his personality and style in every way.

Peniel (@peniel.shin) Peniel, of the band BtoB (Born to Beat) has had quite a lot of success through other social media channels, and frequently brings his performing talent to bear on Snapchat. He Snaps in Korean and English both, so look forward to equal helpings of both cultures when following him.

Amber (@ajol.0918) Amber Liu is a pop artist and rapper who recently debuted a solo album, in addition to the talent that she was already bringing to the band f(x). Hugely popular in South Korea, she remains prominent in the K-pop scene and can frequently be found on Snapchat.

Tablo (@bornhaters) If you’ve heard of the K-pop group Epik High, then you’ve heard of Tablo. A man of many talents, he led the band while also producing, and has expanded those talents to other artistic endeavors as well.

Brian Joo (@B.Joo) Brian Joo is one-half of the Fly to the Sky duo that maintains a strong following in Korea and the US. He’s a prolific artist who has also recently released well-received solo albums. Almost all of his Snaps are in English, and he can be found on most social media platforms in addition to Snapchat.

Christian Yu (@christianyu1) – Also known as Rome, he was the oldest member of K-pop group C-Clown. He broke away from the band and began performing and marketing himself under his birth name. Now, he works as a video director and is quite prolific on Snapchat.

GRAY (@callmegray) This man is a rockstar recording artist who has maintained a strong presence across several labels throughout his career. He’s all over Snapchat, as well as several other social media platforms.

Irene Kim (@ireneisgood) – Though she’s not as immersed in the music side of K-pop as the others on this list, there’s no way that she could be excluded. This woman is a powerhouse of modeling and marketing success, and close friends with Min (listed above.) You won’t be able to wade into the genre of K-pop without hearing about her, and she’s also become iconic in the modeling scene.

Jessica Jung (@jessica.jsy) A California girl who’s currently based in South Korea, Jessica first began to build her reputation as part of the group, Girls’ Generation. She’s also a terrific actress and has landed major roles in several original films, as well as Korean adaptations of popular titles. 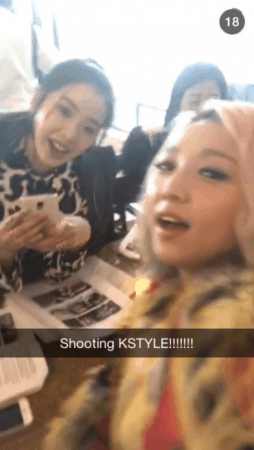 Above, you’ll find a diverse offering of talents that will hugely improve your Snapchat experience upon adding them. All are active, all are successful, and on top of that, they’re only the tip of the K-pop iceberg. As more artists from South Korea catch on to the trend that is Snapchat, expect to see more of your favorite personalities taking up their smartphones in order to communicate with fans both local and international. One of the continually fantastic things about Snapchat is the candid communications that it encourages between everyone who uses it; regardless of celebrity status or Appamatix-writer status like me, everyone’s Snaps are treated the same. The benefit is rarely how much attention a given Snap can capture in the news, as much as what kind of responses it can get from followers who view it during its several second lifespan.

Above are 10 of the best K-pop names that you’ll find on the Snapchat app, but that list could already be changing. Dozens more are available for you to find, and as Snapchat’s popularity rises, that number is only going to rise and expand to include more members of one of the most prolific music genres around.