Mobile gaming has taken the world by storm, proving once and for all that both gaming and geek culture have the power of universal appeal. One such massively popular game is Clash of Clans, and we’re here to provide you with 10 of the most surefire tips, tricks, and cheats to step up your game each time you open the app!

Games of strategy and chance have been popular for as long as we’ve been thinking, competitive being, each striving to outdo each other and prove our expertise and wit. The timelessness has ensured that we always have popular ways to engage our minds with creative strategy, and those games have a history of being accessible for virtually everyone. Simple in concept but rewarding of mastery, this hasn’t changed as the digital era has continued to encompass our lives.

Now that practically everyone in the US is packing a smartphone, it has become the chosen platform for a huge amount of people engaging in gaming culture. Pick-up-and-play titles like Angry Birds, Candy Crush, Fruit Ninja, and others offer a simpler alternative for people that want a more relaxed gaming experience, but other offerings have begun giving smartphone users more complex, demanding alternatives that actually prove to be healthy exercises for an active mind. Clash of Clans fits amidst that niche, and while the basic concepts of the game are simple, the complexity ramps up as you learn more and begin playing against other, experienced people.

The objective is right in the game’s namesake–dominate and demolish any “clans” of barbarians that aren’t allied with your own. At the same time that you’ll be strategizing combat and movement of your various units in the game, you’ll also be juggling the necessary resources that allow you to keep your clan growing progressively stronger.

Player-to-player interaction is constantly encouraged in Clash of Clans, whether it’s had through the fiercely strategic combat or the alliances made with other players to benefit your own clans. For veterans of the “real time strategy” genre of games (think Warcraft, Starcraft, or ye olde Age of Empires), all of this is standard-fare sort of business when it comes to the genre. For people that are new to these types of games, the coming tips are going to be invaluable for your success. Even though Clash of Clans is free to download and play, it’s frequently referred to as a “freemium” game. This is due to the way that in-app purchases can often liberate your gameplay experience in ways that can’t be achieved as quickly through normal gameplay. Let me explain.

Throughout the game, you’ll often acquire “gem,” which function as a universal currency in Clash of Clans. If you’ve just downloaded the game and you’re slowly learning the ins-and-outs of its features, you’ve probably noticed that you’re slowly accruing gems. However, the process is so. So slow, at times, that you wonder if the developers of the title wanted you to play it as fast as you’d like to.

They have, but the full answer to that thought is a bit trickier. Revenue is generated in Clash of Clans by the direct sale of gems to players from within the app. More likely than not, you’ve booted up Clash of Clans to find a “special offer” for a certain amount of gems being sold at a discounted price. This is why we see a combination of the words “free” and “premium” when describing the pay structure of the game. You can certainly download it and play it for “free,” but in order to be free to play at your own pace, you’ll need to pay a “premium.”

That aside, the following tips and tricks are going to help you no matter what type of player you are.

Patience is a Virtue

Certainly, you’ll run into situations where it’s beneficial to steamroll your opponent with every ounce of force that you can muster.

But you’re not very likely to learn much about them, and if you’re not learning much about the way that other people play, you’re not going to have any idea what to do when you come up against someone who you can’t overcome with brute force and superior resources. Additionally, the same strategy isn’t always going to dominate against every single person you face. Fancy yourself a fan of archers and wallbreakers? Best of luck, friend, when your opponent decides to funnel your troops through a series of defensive towers.

Strategy games such as Clash of Clans are, at their core, a juggling act. You need to be able to watch several moving parts at once if you want to be able to succeed, and you’re only going to get good at that through practice.

Offense is the Best Defense

Don’t waffle. Don’t wait. Don’t count on your opponent making the first move in every battle, because they won’t. Sometimes, you need to queue up your barracks and get on the move before each and every nuance of your defenses are ready.

This can be a particular advantage after a new update has been released to the game. The majority of Clash of Clans players always play defensively when they’re faced with changes to the game; they want to see how a new update has affected the gameplay, which can often leave them wide open to an unsuspecting surprise attack from you!

Defense is the Best Offense

If you’re not on top of these in that particular order, then you’re not playing defensively. Rarely is there a benefit to playing the middle ground, either; a strong offense or a strong defense is always going to trump someone that hangs out in between, trying to play both ways in the same amount of time that their opponent is either ramping up an assault or battening down the hatches. 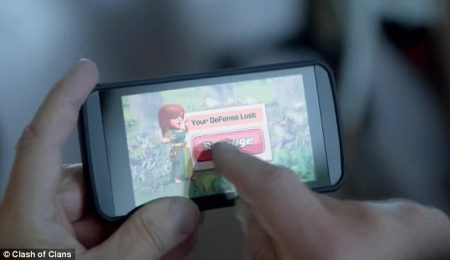 Want an advanced tip? Queue up unit production facilities constantly to keep your elixirs in flux, thereby rendering them out of reach from your opponents. You can cancel unit productions at any time without a hindrance to your resources, so keep those resources tied up and out of reach!

Clash of Clans is a freemium game, and every avenue you turn, you’re urged to pay real money out of your real wallet for digital advantages in a game that you downloaded for free. There’s no much complain in rallying against this business model; it’s popular, it’s widely used, and the fault for this lies in the players who chose to support it with their wallets.

It does not, however, mean that you need to buy into it wholesale. You’re always going to be urged to buy gems in order to speed up your gameplay, but I would strongly caution against it. Complete the campaign, complete achievements, and definitely collect those gems, but only spend them on things that last.

Competitive play is going to cost gems, and as you likely already know, the flow of gems is practically a trickle unless you’re willing to pay for them. Shop smart, and prioritize what you want out of your Clash of Clans gameplay!

It’s All About ‘Who You Know’

Have friends? If not, then make some, and get them into Clash of Clans so that you can clan up and have a few raiding buddies to rely upon. Your resources will thank you for it.

Once you’ve made it quite ways into your Clash of Clans campaigns, you’re going to have the option to form clans with other players. While this can provide you with some much-needed backup and extra resources in harder encounters, be aware that you’ll also be expected to contribute! A partnership is a two-way street, but the benefits you stand to gain are worth it. If you’ve just had your face dragged across your iPhone screen, there’s no better way to remedy the humiliation than returning the favor to the offending player. After suffering a loss, you’ll be given the chance to briefly examine the situation of your opponent, from units used to resource buildings.

Be smart in how you disseminate this information. Newbies are going to have a harder time of this, but once you have some experience under your belt, you’ll know how to “read” your opponents a bit better. Take stock of their building layout, the types of units they were training, and more…and then strike back with a counter-strategy.

Hit ‘Em Where it Hurts

If you’ve been playing Clash of Clans for a good long while, you’ll have some idea of which buildings and defensive structures are most valuable to certain strategies. Likely, this has been learned by getting creamed a few times (which is, honestly, the best way to learn!)

In the brief amount of time that you have to plan your battles, using as much of it as you can afford to scout your enemy. Check their defenses and plan accordingly. Lack of air defenses should tell you “balloons,” while walls should tell you “wallbreakers.” Always plan to counter, even when you’re playing offensively.

Don’t hoard those trophies! Although they can be a nice little status symbol that displays your prowess in the game, smashing too many weak opponents can result in an increase in rank that might land you against tougher opponents than you’re ready for.

If you need to drop a few cups, consider using a hero unit. Ready, deploy, and drop to reduce your trophies without costing yourself any great abundance of resources.

Gems are going to be your most precious commodity, and you’ll get quite a few of them from achievements through the single-player campaign. It can be tempting to rush through the single-player campaign as a sort of “training” and gem accruing strategy, but I’d advise against looking at it this way. Instead, take your time in acquiring and using these rewards, because you’re not going to get such an influx again.

As any strategy gamer is going to tell you, playing against a computer opponent is nothing like playing against another player. Use that meager campaign to learn about the mechanics of the game, but look to other players for learning how to play against them.

While there’s likely a whole bible of tips and tricks that can help you to succeed in Clash of Clans, the above will provide a good foundation that you can build upon with your own, unique playstyle. Part of the fun of a good strategy game is developing your strategy, and all of the above tips are sound advice that will still allow you to do just that.

After all, imitation will only get you so far; success in a game like Clash of Clans requires individual creativity. It’s an online game, also, so while traditional “cheats” are never, ever going to exist, the above 10 techniques, when used properly, may convince your defeated opponents that you were cheating!