Amidst all of the games about sorcery, barbarians, zombies, plants, and slithering snakes, many mobile gamers are enjoying a more traditional experience in 8 Ball Pool. Appamatix is here with 10 of the best secrets, tips and “hacks” that will help you to crank up your 8 Ball Pool experience. If you’re a fan of high stakes gaming, competition, and top-notch multiplayer experiences, you’re in the right place, and looking at the right game. Read on!

Mobile gaming has been enjoying a proliferation of “old school” titles that take advantage of basic game mechanics that can be picked up and played quickly, and still, leave room for mastery. Honestly, it’s a relief! When we download mobile games, we’re not necessarily looking for the deep experience that you might find on a console, with a steep learning curve and hours of character development and…you know exactly what I’m talking about.

Most of the time, it’s nice to have a game that you can pick up and play for a few rounds without being beholden to an hour of staring at your smartphone screen. 8 Ball Pool is a casual game that’s easy to approach but has plenty of room for people to improve their skills and compete for in-game rewards and leaderboard recognition. On top of that, it has the potential to be extremely addictive! This isn’t necessarily a bad thing; it’s good to see simple app-store games with staying power, and it’s not like old-school games of a similar vein didn’t succeed based on their addicting qualities. It’s pool, after all! If it didn’t keep you hooked for “just one more game,” it would be doing something wrong. For players’ benefit, this also means that you’re always going to have plenty of people to play against!

The basic rules for a game of 8 Ball Pool aren’t known to everybody that’s just getting started with the game, so we’ll mix in some of our starters hints with those tips meant for more advanced players. Follow these to a T, and you’ll be pocketing shots left and right!

One of the pitfalls that new 8 Ball Pool players run into the most frequently is a foul; they let the timer tick down for their turn until, before they realize it, they’re out of time! This not only results in forfeiting your turn, it puts the cue ball in your opponent’s hand.

Being that both of these are exceptionally bad for you, it’s important to not rely too much on taking your time with each shot. Sure, it might feel like you’re being extra precise, or lining up some fantastic move, but the truth is, none of that’s going to amount to anything if the timer runs out. A much more sound strategy is to get your eyes used to the time-crunch, forcing them to find your shot as quickly as possible. Speed is key in 8 Ball Pool, and if you can’t keep up, that foul is going to see you punished.

We’re getting into some basic rules of pool, here, but that’s not necessarily a bad thing. There are quite a few moves in 8 Ball Pool that will result in a foul and, as above, lead to your opponent having the ball in their hand. Since this should be avoided at all costs, keep the following things in mind every time that you’re playing.

Even though you shouldn’t take too much time planning your shots, it’s still important to be accurate. If you pot the opposite color any time except for when you’re breaking, it can put the cue ball in your opponent’s hand. If the cue ball hits your opponents color before your own, you’ll get the same effect.

The game will register a foul if neither the cue ball nor a ball of any color makes contact with the rails on the table, too. This is one rule that always sneaks up on me (and being honest, my buddies and I forget about it all the time.) However, when you have a video game keeping track of the rules and your every move, nothing is going to slip by it.

Pay Attention to your Colors!

Which brings us to something that’s oh, so obvious, but bears mentioning anyway. Because so many players do actually forget whether they’re spots or stripes, I’ll say it once here with extra emphasis: don’t forget which color you’re playing! A couple of fouls due to forgetfulness is all that your opponent needs to win the entire game.

Advantage on the Break

When it’s your turn to break, you’re going to be at the highest point of advantage; higher than you’ll be at any other point in the game. Primarily, this is because you can line up the shot that determines how the rest of the game is going to be played, and also because you’ll be able to choose which ball color is yours for the remainder of the match.

Pay close attention to what you pocket (if anything) during the break, too. No matter which color it is, you’re going to get another turn, during which you’ll decide if you’re playing spots or stripes. Keep in mind that nothing that you pocket during the break is going to count towards your score, and also don’t forget that if you pocket the cue ball alone, it counts as a foul!

Surprising nobody at all, you’ll need to have a certain amount of respect for the 8 ball during the remainder of any match, and not just because it’s the namesake of this game. After the break, mishandling the 8 ball is usually the source of most fouls that players both new and old earn for themselves. 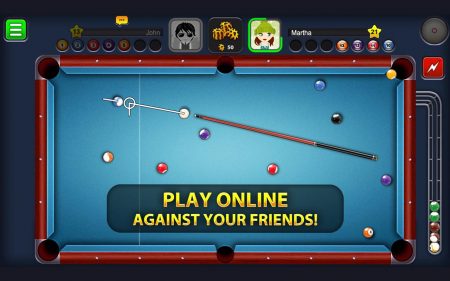 You can see where I’m going, here. Don’t be afraid of the 8 ball, but work around it as you plan your shots throughout the game.

Once you start playing 8 Ball Pool at higher difficulties, you’ll run into tiers where you have to start calling your pockets before each shot, in order to increase your score off of them. Because of this, it can be a useful habit to get into once you have the basic rules of the game under your belt.

Starting out, you’ll probably only be required to call the pocket before you pot the 8 ball. At much higher difficulties, you’re going to need to call every shot.

While you should never run out the timer (I know, I repeat myself), you should also try to begin seeing each frame several shots ahead of where you are. Don’t just react to where the balls are on the table during a given turn, and don’t just shoot wildly in the hopes of disrupting the current state of the table (unless you have to.)

Instead, assume that the cue ball is the only thing that’s going to move over the next several shots. Where do you need the cue ball to be, in order to pot the most of your own color? In this way, the game of pool is a lot like chess. An experienced player will take their time learning the lay of each shot, but a master will know the lay several shots ahead of the current turn.

That little cue ball in the corner of the screen? It’s there for a reason. If you want to disrupt your opponent, make a tricky shot, or otherwise display (or practice) some finesse, tap that cue ball, rotate it according to the little red indicator that shows up, and then shoot.

It’ll apply a trajectory spin to the cue ball and keep it from moving in a predictable, straight line. If you make your shot (which should always be the goal) then you can use spin to set yourself for shots that wouldn’t otherwise have been possible.

While 8 Ball Pool is primarily enjoyed as an online, multiplayer game, you can still practice when you don’t have an active internet connection! Take advantage of this time to brush up on the basics, or try out some of the most advanced techniques or habits we’ve already talked about.

If you’re like me, an offline practice session can almost be a form of relaxation since it’s removed from the pressured, competitive realm of online multiplayer.

Of course, it’s plentifully handy to be able to play 8 Ball Pool when you’re on the go, but it originated on the Flash game website, Miniclip. You can play the full game there, still, and it’s just as free as it is on Android and iOS. On top of that, 8 Ball Pool was meant to be played with a keyboard and mouse before it ever touched a smartphone screen, so if those touch controls and small screens are throwing you off, give it a whirl from the comfort of your laptop or desktop.

There you have it, Appamatix readers! 10 of the best tips, tricks, and secrets for 8 Ball Pool (sorry, no “hacks” for online multiplayer games!) If you have any questions about this addictive little gem of a game, let us hear them in the comments below, and don’t forget to share this article on Facebook and Twitter!